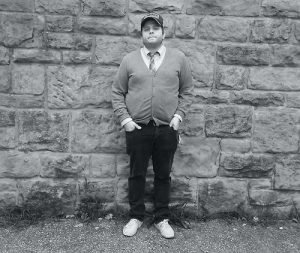 Pittsburgh’s indie folk-punk act The Homeless Gospel Choir, a one man band consisting of outspoken singer-songwriter Derek Zanetti, has released its new album, I Used To Be So Young, via A-F Records. The Homeless Gospel Choir is the Woody Guthrie of the post-hope / pre-apocalypse world that we live in today. He’s personally charged to tear down greed, privilege, and complacency, and is armed with hard truths, humor, and a worldview that every human could benefit from listening to.
Ghettoblaster recently caught up with Zanetti to discuss the album. This is what he told us.
When did you begin writing the material for I Used to Be So Young?
I am constantly writing new material all the time and trying out new things and ideas. I think the oldest song on this records was probably started somewhere like six years ago. Most of it was flushed out just weeks before we went to record.
What was the most difficult song to take from the initial writing stage through recording and mixing?  Why was it so troublesome?
“Capitalismo” for sure. I went into recording with a very basic idea about how I thought the song should go. After dissecting, we realized the song was nearly eight minutes long. We had to trim and cut and change things a bit to help it flow better. But with changing timing and what not it’s a much better song.
Which of the songs on the record is most different from your original concept for the song?
“Don’t forget” started out as just me on an old hickory stump at a lake house in New Hampshire, and turned onto a proper rock and roll tune. I’m very happy with how it turned out. I could have never done it without the amazing ear of Justin Francis and CHris #2.
Did you have any guest musicians play or sing on the record?
I do. Matt Miller, Mike Miller, and Emmy Volcar of Endless Mike and The Beagle Club do a ton of the backing and harmonizing vocals. They are old friends who have a big place in my heart, I am truly proud to have them on this record. Tyler, Josh, and Stowe from White Wives all played a bunch of the instrumentation on the record. White Wives is such a special band to me. Not only do they write some of the most interesting and thought provoking lyrics of any modern band, they also played my wedding, which was ever so special to me.
Steve Larussa also played drums, Steve is an amazing drummer, dear friend, and a true bleeding heart punk rocker. It was a treat to have him be on the new record.
Last but not least Chris #2 of Anti-Flag was at the helm of recording and production. He was able to take my basic folky singin’ in a tin can songs and transform them into what they are now. He helped write guitar parts, and structure instrumentation, but still gave me 100 percent freedom to be creative and make this record my own. Justin Sane (Anti-Flag) and I also would jam and talk till late hours in the night which inspired a lot of the more angry punk parts of the record. It was like a dream come true to have something so special and personal come from the creativity of such wonderful friends.
Is there an overarching concept behind your new album that ties the record together?
The overarching idea for this record is how we have to begin to allow ourselves to walk our own paths in life. That there is in normal, not everyone can be expected to achieve the same things out of life and that’s ok. That this “American dream” has done a lot more harm than good, and if we can start to create our own American dreams we would be better off.
Have you begun playing these songs live and which songs have elicited the strongest reaction from your fans? I’m out on a month long tour right now promoting this new record. It’s amazing the response I’ve been getting. I’m truly humbled by it all. I’m playing a different set every night. Still feeling out what works best.
(Follow him at https://www.facebook.com/TheHomelessGospelChoir.)