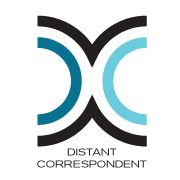 Trans-continental indie-rock super-group Distant Correspondent (featuring members of Goes Cube, Meanwhile Back in Communist Russia, The Seedy Seeds, and more) are preparing their upcoming debut album for an October 22 release on Hot Congress / Old Flame Records. In addition, the band is announcing the formal release of their new “Shatter” 7″ (featuring the B-Side “Badlands” linked above) out September 23 in the UK on Static Caravan Records, as well an exclusive non-album track track titled “Transitive” to appear on an upcoming Old Flame Records compilation out soon.
Ghettoblaster caught up with frontman David Obuchowski to discuss the forthcoming album.  This is what he said.
When did you begin writing the material for your most recent album?
The song “Merge” is one of our earliest songs. Michael (who plays the drums and who played most of the bass on the album) and I were working on that song as early as March, 2012. We tend to record and write a lot of songs in a pretty short amount of time, so a year and half ago may not seem too long, but for us, it’s going way back.

What was the most difficult song to take from the initial writing stage through recording and mixing?  Why was it so troublesome?
As far as songs on the album (as there are a ton of other songs that aren’t on the album), I’d say that song would surely be “Department.” The song has a lot going on. On one hand, we wanted it to maintain its core simplicity and stay somewhat raw, driving, and catchy. On the other hand, the song gave us so much room to build things. So there are a ton of subtle things. Even though the choruses may sound the same, in actuality, no part happens (in the same way) more than once. So in the recording and mixing process, we needed to be careful to showcase this constant, steady evolution—it adds more and more to the mix each section—without making it seem like a proggy song, or one where the core riffs and hooks were buried.

Which of the songs on the record is most different from your original concept for the song?
I am not trying to cop out when I say “all of them.” That’s what’s so exciting about being in Distant Correspondent. I write all of the guitars, and I send them off to my collaborators. Of course, I have these ideas in my head about what kind of beat the song has, or what kind of vocals go with them. But what I get back is nothing like I ever imagined. But in the best way possible. I’ll give you some examples: I had written “Merge” as a sort of atmospheric, lush song that I imagined super slow. Michael got a hold of it, put some propulsive beats to it, and it turned into a tight, sort of post-punk song with an ethereal edge.
Songs like “Say” and “Shatter” sounded a lot like more standard ballads. Then the bass and drums happened, and in the case of “Shatter,” Emily Gray got a hold of it, and the songs just totally changed. I think if we ever did a song that evolved exactly as we first imagined, we’d just throw it out on the basis of it being stagnant. A song needs to evolve far beyond its original conception.

Did you have any guest musicians play or sing on the record?
Yeah, Edith Frost sings on every song of this album. She also does keyboard on one or two of them. For the tour, Margaret Darling (formerly of the Seedy Seeds) is coming on the road with us to lend us her voice.

Who produced the record?  What input did that person have that changed the face of the record?
Michael and I co-produced the record, really. We handled the actual production in terms of determining the album’s “sound” (me: lush guitars, lower more verbed vocals; Michael: really punchy rhythm section to give the record a lot of groove and impact). Edith would send a number of vocal tracks per song: tonic melody songs and a whole bunch of harmonies. She generally left it up to me to arrange them how I saw fit. Obviously, everyone had input as to how their parts were mixed or treated, but generally all tracks came back to Michael and me for us to put them all together.
Is there an overarching concept behind your new album that ties the record together?
I suppose a lot of it is distance in every sense of the word: time, geographic, figurative. The experience of making this record with people so far away really contributed to that. The original title to the album was going to be “Everyone Is Someone Else,” which got at one aspect of distance: the most important person to me is a stranger to someone else, and when you’re in an unfamiliar place, you get that feeling of being surrounded by people who are strangers but who may be important to you some time in the future. Or maybe you see someone and you think it’s someone else from your past, but it’s not, and in the end it doesn’t really matter anyway because they’re a stranger whether it was or it wasn’t the person you thought you recognized. But in the end, we decided that to have the album self-titled really just made the most sense. Our own instrumental/vocal tracks we sent each other were distant correspondences, and the songs to the listeners are distant correspondences, too. I guess this is what happens when you move from New York City to a small town almost two thousand miles away.

Have you begun playing these songs live and which songs have elicited the strongest reaction from your fans?
Yeah, we’ve been doing them live. At first, we were concerned about how we would replicate the songs for live performances. Then we realized we were missing this huge opportunity. The album, I think, has a lot of atmosphere. Underlying that, there is a lot of energy, a lot of hooks. But I think lush melodies/atmosphere really take the front seat on the album. Live, we decided to switch it up: make the energy and the hooks the focus, and have the atmoshpherics be the subtler aspect. We saw it as somewhat natural, and it really clicked once we started rehearsing. But the reaction from everyone, even the labels, is surprise. I’ve been told that live we sound “raucous” and “muscular.” (Maybe it has something to do with my other band being a metal band?)
Since you asked about a single song, I’ll narrow it down to one that is one of my favorite songs of ours both on the record, and live: “Forward.” I think that song is catchy both live and on the record. But where there is a real airiness to the recording, the live rendition has a real edge and by the end it’s a loud, driving song that really gets people’s heads nodding and fists pumping. We’re so excited to go on tour this fall and play these songs every night. Especially with Margaret Darling on the mic. I’m extremely lucky to get to play music with so many musicians I admire.
(Catch Distant Correspondent on their forthcoming fall tour:
10/23, Denver, CO: Walnut Room
10/24, Lincoln, NE: TBA
10/25, Iowa City, IA: Gabe’s Iowa City w/ Limbs, FireSale, HomeGrown
10/26, Chicago, IL: Galerie F
10/27, Columbus, OH: Tree Bar
10/28, Nashville, TN: Springwater Supper Club w/ Josephine and the Wildfront, Elk
10/29, Athens, GA: TBA w/ Blue Blood
10/30, Columbia, SC: New Brookland Tavern w/ The Unawares
10/31, Washington, DC: TBA
11/01, Brooklyn, NY: Union Pool w/ Azar Swan, Dinowalrus, Gabe Levine (of Takka Takka)
11/02, Philadelphia, PA: Kung Fu Necktie w/ Dinowalrus
11/03, Pittsburgh, PA: Howler’s Coyote Cafe w/ Silver Thread
11/04, Cincinnati, OH: Mayday Northside w/ Mack West, Margaret Darling
11/05, St. Louis, MO: Firebird
11/06, Tulsa, OK: Soundpony w/ The Gold Magnolias
11/09, Denver, CO: Hi-Dive w/ Inner Oceans, Miss Americas)