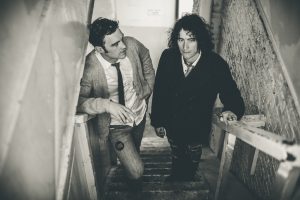 City Walls Autumn Falls is a duo comprised of brothers Anthony and David Gill, who moved from Melbourne, Australia, to New York. Factory, their debut album was financed through an IndieGogo campaign that saw the outfit surpass their initial target for recording. Last winter, the group holed up in a haunted barn in Woodstock, New York, and crafted the harmonious and lush LP, which is reminiscent of Neil Young and Band of Horses. Disarmingly beautiful, Factory is a record that is sure to put the group on folk lovers’ radar.
Ghettoblaster recently caught up with David Gill to discuss the record. This is what he told us.
When did you begin writing the material for Factory?
Around the beginning of 2013, with the exception of the title track “Factory,” which was written in 2012.
What was the most difficult song to take from the initial writing stage through recording and mixing?
“Sheltered Me.” It was one of the last songs we recorded on the record and it took quite a few attempts to get the final take. Most of the other songs were the first or second take but for some reason we couldn’t get the feeling in sheltered Me that we wanted. It almost felt like we weren’t going to nail it down there for a while.
Why was it so troublesome?
The song needs to groove and we just couldn’t get the groove we wanted playing it through as a band. So after about 75 takes we decided to take it back to how it was written, Anthony singing and me playing guitar. We cracked a bottle of Rose’ and really just relaxed. In hindsight we take it as a sign that the way it ended up being recorded is how it was meant to be, and the way were trying to force it in the beginning wouldn’t have felt right if we had just quit trying. If it doesn’t feel right we’ll keep pushing till it does.
Which of the songs on the album is most different from your original concept for the song?
“Factory.” It was the first song we wrote for the record and was originally a full on electric rocker with over the top drumming and a distorted lead guitar. We were listening to way too much Steel Panther at the time.
Did you perform these songs with the previous lineup? Or are these all new compositions??
They’re all new compositions.
Did you have any guest musicians play or sing on the record?
We had Arum Rae sing on “Lady Victoria”. It was a real honor working with her.
Who produced Factory?
We produced it ourselves with the help of the insatiable Reed Kendall from Weird Candle Studios. We met Reed in Philadelphia around 10 years ago and he’s been hanging around like a bad smell ever since.
What input did that person have that changed the face of the record?
Reed is a hard worker and was always ready to go, considering he provided the entire rhythm section for Factory, which shaped the feel of a lot of the songs. He had huge input in terms of the engineering aspect of the album.
Is there an overarching concept behind the music that ties the songs together?
The songs are the last two years of our lives, where we were and who we are now. They tell the story of our recent move across the world, being uncertain about our future at the time and being strongly pulled into an unknown space, yet that was the place that allowed us to reconnect with ourselves. In a way Factory is our awakening.
Have you begun playing these songs live and which songs have elicited the strongest reaction from your fans?
Yes we’ve been playing these songs for over a year now here in the USA and back in Australia, generally it’s the up tempo songs that the fans react to the most when performed live.
(Visit the band here: http://www.citywallsautumnfalls.com/.)