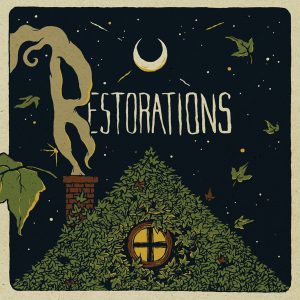 Restorations first appeared on tastemaker’s radars with their 2010 four-song EP Strange Behavior and made a lasting impression with their 2011 self-titled full-length debut. The band’s follow-up 7’’ A/B was on just about everyone’s best of 2012 list and with good reason: they are an exciting an original band who filter the punk lexicon through their own lenses.
Ghettoblaster caught up with Dave Kylman to talk about classy mustaches.  And their rad new album, LP2.  This is what he said about it…
When did you begin writing the material for LP2?
That’s tough to pinpoint exactly. “New Old” is a song culled from writing sessions for LP1 actually, so we’re talking back in 2010. It had been on the scrap pile for more than a year before it was dusted off and rewritten into the song it is now.  That first version was pretty rough. And then there was “D,” which started with a simple guitar passage that quickly took form only a couple weeks before we were to go into the studio. That’s the “fun” trivia answer. Boring answer: Most of the songs were written between late 2011 and early 2012.
What was the most difficult song to take from the initial writing stage through recording and mixing? Why was it so troublesome?
“Adventure Tortoise” had a few stumbling blocks along the way. Usually when we get together and write, one member brings in an idea and we all build it up. Every now and again a song comes in fully formed. This was one of those situations. The intro ambient noise part was always part of the equation but it had to be explained rather than shown because it wasn’t fully formed yet. The timings for the buildup were meticulously organized, and the song as a whole had a specific structure. It’s not always conducive in a room full of creative songwriters, to have that kind of rigidity. When we got to the studio it turned out that a part of the intro for drums had to be cut, and the original idea for the keyboards turned into something else entirely. It turned out great in the end, but there was a brief time when the song looked like it might have to hit to the scrap pile, which would have been terrible because it works so well as the record closer.
Which of the songs from LP2 is most different from your original concept for the song?
Aside from those hiccups with “Adventure Tortoise,” there isn’t any particular song being too far separated from original conception. We walked into those sessions more confident in our individual jobs than probably any other recording we’ve ever done. That includes most of our past bands as well. There’s always going to be things you wanted to do prerecording that just don’t make sense once you’re in that recording context and some other parts that get fleshed out more completely. For example, “D” and “Quit” didn’t have fully written guitar solos till after they were recorded, which was a conscious decision in the interest of getting the best, most spontaneous performance. It was a risky move but it made the process more fun and lent a better feel to the end product.
Did you have any guest musicians play or sing on the record? Or have you recorded any guest vocals on any other notable records that we should know about?
There aren’t any guest vocalists on LP2, but Jon Low had a big hand in everything. He was instrumental in bringing the vocals to the highest caliber we’re capable of. He also helped form the more detailed areas including extra percussion and the development of the background parts of the record that can carry a song whether you consciously notice it or not. In a lot of ways he became like a 6th band member.
As for us ruining other band’s recordings, Jon and Ben were called away from the Super Bowl to add their voices to a song on the new Paint it Black 7” Invisible, which came out April 2 on No Idea records. We’re really excited that came together. You can hear those voices polluting the next Signals Midwest full length which will be out soon via Tiny Engines.

Tell us about your producer Jon Low? What input did he have that changed the face of the record?
Jon Low isn’t just an engineer and a producer, he’s a friend. Hell, he’s Jon’s roommate. He played (totally necessary) 4th guitar on a couple songs at the LP2 release show. He’s one of the most innately talented people we’ve ever had the fortune not just to know but also work with. And he makes a damn good cup of coffee. He’s always on with a new way of looking at a song or a track, which is crucial when you’ve played a part a million times can’t quite figure out what’s not working. There’s a lot to be said for anyone who can hear an idea for a song, almost instantly say, “I know exactly what this needs,” and be absolutely right about it. And he would never change anything without explaining what he was doing and why he was doing it, which can’t always be said for a lot of studio engineers, especially in the mixing phase. Plus, his mustache is straight up classy.
Is there an overarching concept behind LP2 that ties the record together?
Both musically and lyrically, LP2 is an exploration of the small and mundane moments that make up a life. It’s about the small moments, the repetitive drives and rides in between events, the conversations that don’t seem so significant until later on.
Have you begun playing these songs live and which songs have elicited the strongest reaction from your fans?
We’d been road testing about half of the songs for a good while before the record came out. It takes a bit to get comfortable with performing a song before it goes into the studio. And then you come out of that setting it’s changed the song such that you have to rethink the concept of how the song is to be played live. “Let’s Blow Up the Sun,” “D,” and “New Old” have all seemed to get a pretty solid reaction. Of, course, the natural hope is that you don’t have to single out any particular song in the interest of eliciting audience participation. It would be nice if (again, hopefully) LP2 would be the sort of cohesive collection of songs that it doesn’t matter what we play, that we could play whatever we choose for whatever show we’re playing. Wishful as that sounds, those were the original intentions. We hope time proves it right.
(Catch Restorations at the following shows:
w/ The Menzingers, Fake Problems, Captain We’re Sinking
5/24 Philadelphia, PA @ First Unitarian Church
5/25 Cambridge, MA @ Middle East – Downstairs
5/26 Amityville, NY @ Revolution
5/27 Syracuse, NY @ Lost Horizon
5/28 Buffalo, NY @ The Funeral Home
5/29 Cleveland, OH @ Now That’s Class
5/30 Detroit, MI @ Smalls
5/31 Indianapolis, IN @ Hoosier Dome
6/01 Chicago, IL @ Subterranean
6/02 Milwaukee, WI @ The Cactus Club
6/03 St. Louis, MO @ The Firebird
6/04 Newport, KY @ The Southgate House Revival
6/06 Atlanta, GA @ The Masquerade
6/07 Orlando, FL @ The Social
6/08 Jacksonville, FL @ Phoenix Taproom
6/10 Washington, DC @ The Rock and Roll Hotel
6/11 Brooklyn, NY @ Saint Vitus
6/12 Asbury Park, NJ @ Asbury Lanes)