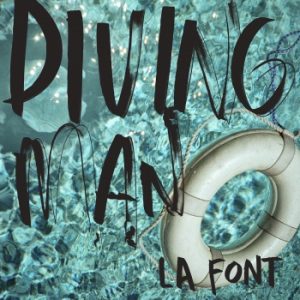 LA Font’s new LP, Diving Man, is out November 19 on New Professor Music, the boutique label that’s home to Body Parts, Gothic Tropic and many more of L.A.’s best underground bands. The album is all wry love songs and tales of failing your way through shitty friendships; guitar heroics that recall legends like Pavement, Built to Spill and Sonic Youth; windows-down garage grooves nodding to peers Deerhunter,  windows-down garage grooves nodding to peers Deerhunter, King Tuff and Speedy Ortiz; and the bold, witty, unfuckwithably hooky songwriting that belongs uniquely to Danny Bobbe, who on this album establishes himself as the best indie rock songwriter working in Los Angeles right now.
Ghettoblaster recently caught up with Bobbe is discuss the record.  This is what he said about it.
When did you begin writing the material for your most recent album?
Some songs pre-date our first album, The American Leagues. The title track “Diving Man” does. I wrote that song and forgot about it. I found an old CDR of some demos and was like “oh yeah, this one.” On the other hand “Onshore” was written a month before the recording session.
What was the most difficult song to take from the initial writing stage through recording and mixing?  Why was it so troublesome?
We had the most difficulty recording “Sharks,” which is strange because we had already recorded it once before for a 7-inch. Maybe it was because we were trying to re-envision it and had the last one stuck in our heads. Either way we had to run eleven takes before it started to gel. It paid off though, the freak out section in that song is an album highlight.
Which of the songs on the record is most different from your original concept for the song?
“Apollo 10” took on a life of its own. We striped it down to its leanest form and then slowly added arrangements we don’t typically use, like synthesizers, and long tape delays. It turned out way different from the acoustic demo where it started (on YouTube).
Did you have any guest musicians play or sing on the record?
Eric Palmquist, our super talented producer/engineer, has a fun vocal cameo. Keep your ear out for it on “Down the Road.”
What input did Palmquist have that changed the face of the record?
Eric Palqmquist produced the album and really whipped it into shape. It started weeks before we entered the studio. He showed up to practice and was like “guys, that’s your fourth guitar solo in three songs. Lose one.” Without him it would have sounded like The American Leagues, which isn’t a bad thing, but we were going for a richer sound and he brought that to the table.
Is there an overarching concept behind your new album that ties the record together?
It speaks to the time in our lives it was written. Like each lyric represents a moment of time. It’s an album about real people and places.
Have you begun playing these songs live and which songs have elicited the strongest reaction from your fans?
Yes, they’ve all been stage tested. That step is very necessary for us to see what works and what doesn’t. Even what parts of songs work and what we can do without. “Collect the Dust” gets reactions, we often close sets with that song and even have an alternative ending for when its appropriate.
(Check out LA Font here: http://lafontband.com/.)