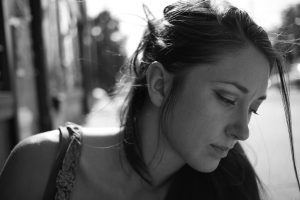 We’ve played all of them live at this point but can’t do some of them consistently without a string section, which only happened during the CD release show. The most emotional song “Fall of the Seraph” is the one that has elicited tears, startles, and silence for a good five seconds after the song is over. It was also the most emotionally draining song to write, because it was one that I also attached my story to, making it personal. I had to take myself to a place of rage and despair and transcendence and peace throughout the whole process, and would sometimes have to leave the piano because it was too much. So, I’m glad that when I play it live, that response lives on through the listeners.
(Visit Crystal Bright & the Silver Hands here: http://crystalbrightandthesilverhands.com/#absolute-elsewhere.)