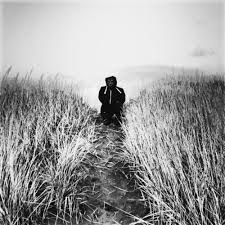 A Plan To Tell The Future

Longtime musician and songwriter Cory Gray (aka. Carcrashlander) returns with his latest full-length, A Plan To Tell The Future, to be released January 13th on Jealous Butcher Records and Curly Cassettes. Getting his start in the piano driven indie-rock band Desert City Soundtrack in the early 2000s, Gray has since collaborated with a long list of bands including, The Dodos, Mirah, The Decemberists, Laura Gibson, Graves, Raymond Byron and the White Freighter, The Dandy Warhols, and many more (check out the full list on his website).
While not recording, producing, and contributing to other projects, Gray finds the time to record his own solo project, Carcrashlander, now releasing his fourth solo record under the moniker.
Ghettoblaster caught up with the singer/songwriter/pianist to discuss the record.  This is what he told us about it.
When did you begin writing the material for your most recent album?
The majority of the lyrics for this record came from a notebook I kept in the spring of 2010 while sleeping in a little driftwood fort on Pria de Galé just south of Lisbon or crashing at the Dois ao Quadrado hostel in Sintra. The music was developed during a residency at Scenic Burrows in 2011/12.
What was the most difficult song to take from the initial writing stage through recording and mixing?  Why was it so troublesome?
I think I did the most mix revisions on “All My Light Begins To Dissipate”, probably because it was challenging to get the right balance between the distorted choruses and the mellower verses.

Which of the songs on the record is most different from your original concept for the song?
The track “Nothing More Than Something” was originally a completely different track that didn’t make the record called “Concrete Clock”.  I pitched down the drums on the tape machine and re-grew the new slower track from the result.
Did you have any guest musicians play or sing on the record?
Brian Wright (drums) and Cliff Hayes (bass) have been staples of CCL, but pretty much the rest of the musicians were guests that happened to drop by or were recording other projects at the studio. Adam Selzer played guitar on a bunch of tracks, Ryan Stively played some baritone on “One Shot Charlie”, and the title track, Matt Berger played drums on the title track, Sabrina Velasquez lended some vocals, Sarah Johanne played violin on “Walls of the World”, Damian Cohn emailed me a lush soundscape for “Life-Size Head of Yourself”, Todd Corbett played some psych-bass and Jacy McIntosh and Kelsey Crawfords sang he chorusese on “Call in Sick”. I hope i’m not forgetting anyone but probably am.
Who produced the record?  What input did that person have that changed the face of the record?
This one was self-produced, and changed the way I had been working because the residency Scenic Burrows afforded me a much broader timeline than I ever had before. I was able to try and throw away as many ideas as I could.

Have you begun playing these songs live and which songs have elicited the strongest reaction from your fans?
Not yet, but with a little luck maybe I’ll get a fan if I do!
(Visit Gray at his website here: http://corygraymusic.com/#1e1/custom_plain.)