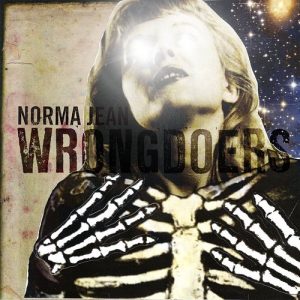 Atlanta-based, Grammy-nominated hardcore act Norma Jean are veterans of the scene, having sold over 416,000 combined units in the United States.  More importantly, they are esteemed for their aggressively artful sound which has garnered critical praise around the world as evidenced by the overwhelmingly positive press that greeted the band’s previous Razor and Tie album Meridional.  Their latest release Wrongdoers, has been heralded as a masterpiece, surpassing the it’s predecessor in heaviness, emotion and mood.
The album was recorded at Covenant Recording Studios in Kansas City with producer Josh Barber and was mixed by Jeremy Griffith.   Wrongdoers is the band’s sixth full length album and their second Razor & Tie album to date.
Ghettoblaster caught up with vocalist Cory Brandan as the band completed their run on the Summer Slaughter tour alongside Dillinger Escape Plan to discuss Wrongdoers.  This is what he said about it.
When did you begin writing the material for your most recent album?
We started in August 2011 and wrote sporadically until November 2012.

What was the most difficult song to take from the initial writing stage through recording and mixing?  Why was it so troublesome?
For some reason it was “If You Got It At Five, You Got It At Fifty”. Its one of the shorter songs on the record and it just gave us a lot of hell. We actually scrapped the song a couple of times. I didn’t want to do that. Jeff wrote a majority of the parts on that song, but I ended up arranging most of it until it worked. it was a bitch but we work as a team and in the end, it ended up being one of our favorites.

Which of the songs on the record is most different from your original concept for the song?
Definitely “Sun Dies, Blood Moon”. When we started writing the song, it was supposed to be a sludgy heavy rock song. In the end it turned out to be a long jam track with multiple instruments. It’s still sludgy, though.

Did you have any guest musicians play or sing on the record?
We ended up with quite a few actually. My brother Adam came in and did some background vocals and several keyboard / organ parts. My cousin came in and did some cello with this friend who played violin. Aaron, who co-produced along with Josh did some drum parts. Wolf, formerly of The Chariot, did some vocals on “If You Got It”…

Who produced the record?  What input did that person have that changed the face of the record?
Josh Barber was the producer. Josh did a great job making all the sounds we wanted come to life. That was really what made our relationship work. If anything, his translation of “band dude” language is top notch.

Is there an overarching concept behind your new album that ties the record together?
There is somewhat, but it wasn’t intentional.

Have you begun playing these songs live and which songs have elicited the strongest reaction from your fans?
We’ve been playing “If You Got It At Five…”” and the reaction has been great. Before the record was released we were playing The Lash Whistled Like a Singing Wind” and “Hive Minds”.
(Watch the bands hilarious new music video for “If You Got It At Five, You Got it At Fifty” on Alternative Press HERE. The video was directed by former drummer Daniel Davison (August Burns Red, The Chariot, Manchester Orchestra).)