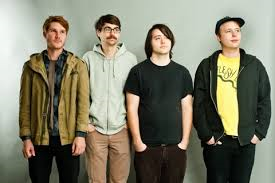 This time around Austin’s gracious ole punk scene brings us the Ghetto Ghouls.  They’re ready and set to release their debut, self-titled LP via Monofonus Press on April 8.  At night these guys wield the torch of sloppy ’80s noisy punk like The Dicks, Stick Men, Scratch Acid and work with a drunken urgency best summed up by the fact that the entire album was recorded in just four hours.
Ghetto Ghouls have played in bands together since they were fourteen years old.  Inside the cinder blocks of legendary venue and bar Beerland, the Ghetto Ghouls have grown into one of the best punk bands in town.  In an over saturated landscape of ’70s worshipping garage bands, a stripped down Texas punk band like this is most definitely needed.  Look out for Ghetto Ghouls at SXSW and on tour this April and May, plus a single this summer on 12XU, the label of Gerard Cosley (Matador Records owner) .
Ghettoblaster recently caught up with vocalist Corey Anderson to discuss the self-titled LP and 7?.  This is what he said about them.
When did you begin writing the material for your forthcoming album?
We started writing in early 2013.
What was the most difficult song to take from the initial writing stage through recording and mixing?  Why was it so troublesome?
I wouldn’t say any of it was difficult. We changed things around quite a bit, but only because it felt like the natural way to do it.
Which of the songs on the record is most different from your original concept for the song?
Probably “simple c”. It was originally faster and louder but one day during a practice for whatever reason decided to try turning down the volume and playing it slower.
Did you have any guest musicians play or sing on the record?
No just us.
Who engineered, mixed, mastered and/or produced the record?  What input did those people have that changed the face of the record?
Ian Rundell, our drummer, did all of it in his studio. We also had Chris Stephenson from Spray Paint, Dikes of Holland, Massagenist etc. come in to give us an outside perspective on mixes and stuff.
Is there an overarching concept behind your new album that ties the record together?
No.
Have you begun playing these songs live and which songs have elicited the strongest reaction from your fans?
We’ve been playing all of them live. Pretty much every time we write a new one, we try to play it at our next show.
How did you get hooked up with 12XU for a 7??
Gerard, who runs 12XU asked if we’d be interested after he caught one of our shows. I really like all of the stuff he’s putting out so it was a no-brainer when he asked.
Were those songs recorded when you did the record?
No, we had written those and had some live recordings but I think we got into the studio within a week of first talking about doing the 7”.
Will that be more of the same for those that hear the album or is there a curve ball on that 7??
It’s two songs. The first track is more similar to what we did on the album. It’s a song I was working on called “plastic violence”, but never really got around to finishing before we recorded the album. The second track, “things”, sounds a bit different than the LP. I think it has a darker tone to it.
(Visit Ghetto Ghouls here:
GHETTO GHOULS ON FACEBOOK
GHETTO GHOULS ON BANDCAMP)