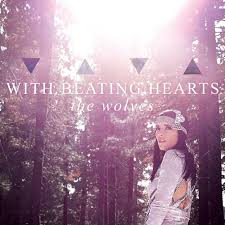 Colleen D’Agostino Moreaux (of The Material) is set to unleash her solo EP as her ’80s inspired electro-pop alias, With Beating Hearts. She just released her debut EP, The Wolves  as WBH on Feb 4. The EDM world has already been buzzing since Deadmau5 posted his sketch, “Drop The Poptart,” featuring Colleen on his soundcloud page – before removing the track and going into hibernation to finish the upcoming record. Check out the sketch on Less Than 3 here: http://blog.lessthan3.com/2013/11/deadmau5-colleen-moreaux-drop-the-pop-tart/
While many may know her as the soulful and raspy female lead with powerhouse vocals that soar over The Material’s infectious pop rock, multi-faceted Colleen D’Agostino unleashes another dimension of who she is as an artist. Colleen’s solo venture, With Beating Hearts, is her creative playground to explore a world of music she’s always felt a connection with- ’80s inspired electro-pop.
Ghettoblaster recently caught up with her to discuss the EP.  This is what she told us.
When did you begin writing the material for your most recent EP?
I started writing the songs for The Wolves EP over a year ago with my friend Blake Harnage.  I flew down to Florida and we wrote and recorded three tracks in five days. It was crazy, but it came together really fast and I loved the energy in the session.
What was the most difficult song to take from the initial writing stage through recording and mixing?  Why was it so troublesome?
I think the track “Crazy Love” was the hardest song for me to write. It sounds silly because it is by far the simplest song on the EP, but I needed to let go of my typical writing style for this track and just write a catchy chorus melody. Normally I work really hard to make a song tell a story, and tend to do so by lots of lyrics. I feel everyone can relate to “Crazy Love” and I think I was able to tell the story without making it overly wordy. It was a great exercise on doing more with less.
Which of the songs on the record is most different from your original concept for the song?
The track that ended up most different from its original form is probably “The One For You” because I had written it with my guitarist Jon Moreaux before I went to Florida.  The track started out as an acoustic song, then we tried playing it with my rock band The Material first, but it never had the vibe I wanted.  Finally I showed the idea to Blake while we were writing and we took Jon’s idea and made it into an electro-pop track for With Beating Hearts.  I love the song in each of its different stages but I think it fits best this way with an Ellie Goulding-ish sound.
Did you have any guest musicians play or sing on the record?
Blake played most of the instruments on the record, but it was just the two of us recording together.
Who produced the record?  What input did that person have that changed the face of the record?
Blake Harnage from the band Versa.  I have always admired his musicianship and creativity so it was really cool to finally work together after being friends for a few years.  Blake is a keyboard and synth collector and knows a lot about electronic music.  I loved his insight and ability to help me create that ’80s vibe through analog synths on the record.
Is there an overarching concept behind your new EP that ties the record together?
I describe the record as being electro-pop with a hint of ’80s.  Each song is different but if you listen to the synths in the EP you will hear the strand of 80s vibe flowing through the entire EP.
Have you begun playing these songs live and which songs have elicited the strongest reaction from your fans?
Not yet but I am looking for the perfect time to put on my first show for With Beating Hearts! It’s been really fun to plan the instrumentation since I am used to touring with a 5 piece rock band.  I look forward to adding lots of cool electronic elements and am already planning a pretty cool light show with my friend/lighting guru Andre Ribeiro.  Stay tuned!
(Stream “Drag Me Down” here: https://soundcloud.com/withbeatinghearts/drag-me-down-1/s-TchrI
And check her out at these links:
http://www.colleendagostino.com
http://www.withbeatinghearts.com
http://www.facebook.com/withbeatinghearts
http://www.soundcloud.com/withbeatinghearts
http://www.twitter.com/wbeatinghearts)