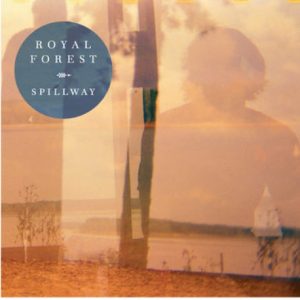 Austin’s Royal Forest are not big believers in static sound, though they do appreciate the sound of static. Experimental across media—using analog tape loops in recordings and live at shows, for example—the band strives to reinvent their songs in new ways.
Lately this experimentation manifests itself in field recordings. Royal Forest has made songs in a single-prop airplane above the Texas hill country, inside a WWII submarine in Galveston, and in a lightning storm among the Monahans sand dunes. Not content to be labeled a studio band or live act, the band pushes the limits of composition, using whim and on-the-fly audio manipulation as songwriting tools. Experimentation is their evolutionary engine.
For all the geeky shit, Royal Forest is awfully listenable, and their latest album, Spillway (which dropped earlier this week on King Electric) proves just that. The loops and field recordings only enhance their memorable hooks and positive energy. The band’s dedication to DIY is not only impressive, it imbues their records, videos, and live shows with infective charm.
Ghettoblaster caught up with Royal Forest’s Cody Ground recently to discuss the album and this is what he told us…
When did you begin writing the material for your most recent LP?

Some of the songs were written two to three years ago and some of them are brand new. A lot of them changed quite a bit once we rearranged them in the studio.
What was the most difficult song to take from the initial writing stage through recording and mixing?  Why was it so troublesome?

“Castro” – we have 18 versions of it. We recorded all these different sounds, tape loops, and vocal parts but had a hard time structuring a song out of them.

“Black Hills.” I t started out as this janky little acoustic piece we called “Charlie Brown” as it had this forced Vince Guaraldi feel to it.

Did you have any guest musicians play or sing on the record?
Our friends Garrett Johnston (former member of the band), Monte Holman, and John Kelley contributed to the record. Monte and John recorded background harmonies and emailed them to us.

Who produced the record?  What input did that person have that changed the face of the record?
We self produced the record. Justin, our guitar player records and mixes everything at Shine Studios here in Austin. We like to work songs up as a band and record a bunch of different ideas, then start deconstructing things. A lot of our production comes from taking the legs out from a song – like if it was written on an acoustic guitar or piano, taking that instrument out and letting the smaller parts of the recording breathe.
Is there an overarching concept behind your new album that ties the record together?
Lyrically, the songs are loosely related vignettes with characters and imagery based on people I grew up with and places I went as a kid or on tour. I wanted to kind of channel 70’s country/Americana music.

Have you begun playing these songs live and which songs have elicited the strongest reaction from your fans?
We’ve been playing a lot of the songs for awhile now but, a lot of the songs are still pretty new to the audience so we’ve been trying to get them involved by recording them singing a note or making sound and weaving that into the music through analog tape loops.
(Catch the band at one of the following dates this August: