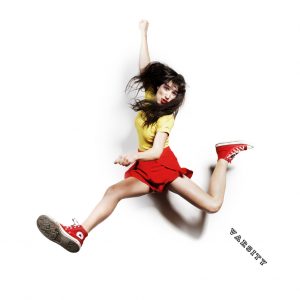 Christina Courtin’s singing began as early as she can remember.  She was always obsessing over singers, singing, and songs. She decided at a very early age that music was to be her life.  While in New York City honing her violin skills at the Juilliard School, something wasn’t sitting right.  Only violin and no singing?
Word finally got around that Christina wasn‘t a one trick pony. A band was formed, shows were played, beautiful magical times were had, and her self-titled debut record was released on Nonesuch in 2009.  Which brings us to now. Christina Courtin’s new sophomore release Varsity was recorded in Brooklyn, NY and Austin, TX with the help of Ryan Scott and Mike McCarthy (Spoon, Trail of Dead, White Rabbits). Felt and heard as a new chapter in her musical life, this record has more of the real Christina in it… attitude, edge, and ROCK.
Ghettoblaster caught up with Courtin to discuss Varsity, which drops via Hundred Pockets Records on March 5.  This is what she said about it…
When did you begin writing the material for your most recent album?
This album has been on the shelf for close to two years due to legal mishmash and also dilemmas involving funding and support.  The material from Varsity was written close to 2 1/2 years ago.  I am
currently working on my 3rd solo set of songs.
What was the most difficult song to take from the initial writing stage through recording and mixing? Why was it so troublesome?
“Lightfighter” is a song very close to me and I think that Mike and I had a different opinion about how to record it and mix it.  Two very important components.  Sometimes I can be too particular about performance issues and he can be very involved in the sounds, so those elements combined led to some miscommunications.   Then again, we fought pretty good all the way through which I was grateful for.
Which of the songs on the record is most different from your original concept for the song?
Some of the songs on this record are direct copies of demos I had made at my house, like “Caroline” and “Lightfighter” (with the addition of some toms).  As I said, most of the songs were already older songs at the time, so I had plenty of time to premeditate and think about what I wanted things to sound like and what world I wanted them to live in. “Landslide Dive” and “Radio” were two songs where we did some massaging to. We tried to get them to feel and flow easier.
Did you have any guest musicians play or sing on the record?
Friends of The Knights and Brooklyn Rider came in and played some strings, Matt Kilmer (The Mast, Louis CK) played some percussion, Rob Burger (Iron & Wine) contributed too.  All excellent musical people and great friends.
Who produced the record? What input did that person have that changed the face of the record?
The one and only Mike McCarthy produced Varsity.  Mike is famous for being very committed to getting the ‘perfect’ (or as close as possible) sound and performance.  We would spend literally hours honing in a sound, trial and error style.  He is incredibly knowledgeable when it comes to recordings, music, musicians, gear, etc.  Was a great learning experience for me to be around him.  He turned me on to a lot of music I didn’t know, hipped me to certain techniques, and was always trying to get me to think outside of myself.  I was also really excited about working on tape.  It forced me to make decisions *gasp* and to musically commit in a way that I wasn’t privy to before.  He has remained a great friend and a true supporter.  We plan on working together again sooner rather than later.
Is there an overarching concept behind your new album that ties the record together?
I’m just trying to write good songs, trying to find the right sounds, trying to let people in on the really special and creative world that still does exist in New York.  I wanted to make something that Mike, myself, and all the contributing musicians can be proud of.
Have you begun playing these songs live and which songs have elicited the strongest reaction from your fans?
Yes, I’ve been playing these songs for a while now.  “Varsity” is always fun, as is “Lightfighter.”  People seem to dig on those.