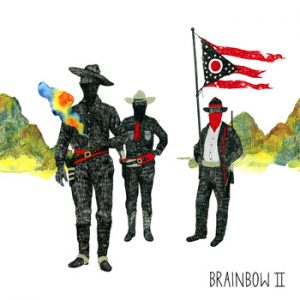 At one time, Columbus Ohio’s Brainbow was the city’s premiere post-rock, instrumental band.  The group delivered slow-moving, acid-damaged guitar jams and wordless psychedelia that split the difference between Syd Barrett-era Pink Floyd, Earth, and Explosions In The Sky.
Though they’ve been basically non-functioning for two years, the band is finally unveiling a gargantuan second ablum. II will be out on double vinyl as of Jan. 19?s must-see release show at Ace of Cups, also featuring Columbus supergroups EYE and Connections.
Ghettoblaster recently caught up with Brainbow guitarist Chris Worth to discuss II.  This is what he said about the record…
When did you begin writing the material for your most recent album?
A little before we finished the last one… 2007 maybe?
What was the most difficult song to take from the initial writing stage through recording and mixing? Why was it so troublesome?
The first one on the record, “Gather on the Water.” It took us about a year to get it together, start to finish. Things with us don’t often turn out the way they start, so there’s a certain amount of commitment that has to happen to get work done. Sometimes you take a lot of wrong turns before you end up where you wanted to be, and it can be frustrating when you can’t quite see how to get there.
Which of the songs on the record is most different from your original concept for the song?
That’s tough. Like I said before, we aren’t often sure how things are going to come out until they do. “Crooked Beak” started off as a pretty loud rock song, and some of those signifiers are still there, but we had to do some sanding to get it to sit right.
Did you have any guest musicians play or sing on the record?
No, everything was all us. We’d talked about having some additional orchestration, but it was logistically tricky, so we did work to incorporate those parts more directly into the songs.
Who produced the record? What input did that person have that changed the face of the record?
Jon Fintel from Relay Recording engineered it and offered his opinion when requested. He’s a patient guy, and worked very hard to make sure that everything we threw at him was audible. He’s been a friend for a very long time, and he recorded our last record, and we wrote most of this one in a practice space in his old studio, so there isn’t anybody outside the band that knows the music better. He became pretty good at translating weird metaphors and analogies into audible representations. I think it would have been difficult to make this record with anybody else.
Is there an overarching concept behind your new album that ties the record together?
It’s not a concept album or anything. By the time we were writing it, we’d all gotten more comfortable with the process of writing together, so it was easier to let the songs breathe a little, which I think contributed to the overall sound. We wanted things to be expansive, both lush and arid… like Egypt, and space, and the American frontier at the same time.
Have you begun playing these songs live and which songs have elicited the strongest reaction from your fans?
We haven’t played live in two years, but we’d been playing most everything live for a while. I love playing live, but sometimes it’s a struggle to pull off subtlety. I think the best shows are always the ones where we really feel like we’re all working together, moving the music forward. The audience is always responsive to that. Nobody like to go see a band just bang away at the notes. “Nine Pointed Star” is flashy in the right ways — it seems to be the most accessible to someone that hasn’t seen us before.
(Purchase II on 2xLP before they’re gone here: http://brainbow.bandcamp.com/.)