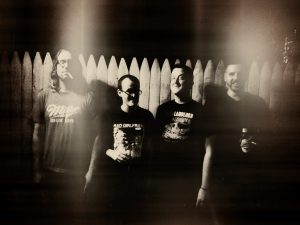 Pittsburgh, PA band Remainders use their melodic punk to conjure up the genre’s sometimes lost perception of fun. Forming the band in 2014, guitarist Dan Delucia, guitarist/vocals Karim Akacem, vocals/bassist Chris Feigh and drummer Tim Little cultivate a driving and hook-packed sound.
Combining that sound with songs whose lyrics deal in the frustrations, disappointments, and mysteries of everyday life and you have a combo of fiery and impassioned punk reminiscent of elements of comparable bands like Latterman, Iron Chic and The Menzingers, as well as genre legends Bouncing Souls, Farside and Face To Face. Remainders make their EP debut in Fall 2014 with Fine Exits along with a split 7” release with Underground Communiqué’s Barons, also from Pittsburgh, which dropped in late October.
Ghettoblaster recently caught up with Feigh to discuss both releases. This is what he told us.
When did you begin writing the material for Fine Exits?
Probably began material for Fine Exits right around March and April 2014.
What was the most difficult song to take from the initial writing stage through recording and mixing?  Why was it so troublesome?
The songs for the EP and split luckily came quickly and naturally just due our chemistry along with being simple and fun. I’m sure in the future we’ll take on writing and recording new material that’ll prove to be challenging.
Which of the songs on the record is most different from your original concept for the song?
Maybe “Slow Quitter” in my opinion. It filled out really well compared to how I personally initially thought it would sound.
Did you have any guest musicians play or sing on the record?
No, but we would possibly have some for a full-length.
Who produced the record?  What input did that person have that changed the face of the record?
Basically Dave Rosenstraus and ourselves. It was a faster process than I’m used to and had a bit of input from his past experiences that was very helpful.
Is there an overarching concept behind your new album that ties the record together?
Not too much this time. It’s very much one of those things where the lyrics are personal but anyone can make their own connection and how things relate to their own situation.
Have you begun playing these songs live and which songs have elicited the strongest reaction from your fans?
Yes, definitely. Maybe “You’ll Make Some Fine Exits” and “Slow Quitter”? But overall good reactions so far.
You also have a split 7″ release with Barons.  How did that come together and how does that split complement both bands?
We were good friends from way back that finally timing worked and we could do it. We’re much in the same genre however totally different sounding with a different mood to each band which I think works well back and forth.
(Catch Remainders live here: 11/15 @ Howlers, Pittsburgh PA w/ One If By Land, Bernies and Astpai (EP Release Show).)