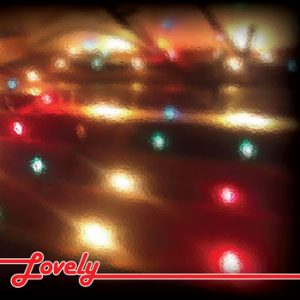 While there is certainly something to be said for discovering a new group of musical comrades, and the pleasant surprises that come with making music with a new group of collaborators, reconnecting with a group that is familiar holds significant magic too.  Shared experiences and history, knowing when your homies have your back, and being pleasantly surprised by reaching new milestone’s together offers chemistry and confidence in spades.  If it weren’t for this phenomenon, the popular act of doing a “reunion run” wouldn’t exist, right?
The dudes from Dayton post-rock quartet Lovely know this phenomenon intimately – they’ve been making music together for nearly two decades.  Honing their chops in Shadyside, Vows, Sound For Language, and Kuan, these guys know each other inside and out.  And on their recent EP the chemistry is electric.  A ‘90s post rock influence is also present here; the group is quick to pull pages from the Seaweed, Fugazi, Quicksand and Hot Water Music playbooks, making the edgy, guitar centric approach sound just as fresh in 2013 as it did in 1997.
Ghettoblaster recently caught up with guitarist Charles “Chip” Heck to discuss their new Waitin’ In Dayton EP.  This is what he said about it.
When did you begin writing the material for your most recent EP?
A few of the songs (it took, spirits, knots ) actually date back to the Shadyside days. Shadyside demo’ed the music for “spirits” and “knots” back in late ’04/early ’05, but never put lyrics to them or really finished the songs. So, when Dave and Vinnie and I started jamming together again in the summer of ’11, I pulled those back out as a jump off point.
“Try too hard” is a song I wrote sometime in ’08 or ’09 for the band VOWS, that Dave and Wendell and I were in with Justin Roseberry, that never really got worked out. “Out on 17th” is an idea Wendell had been kicking around since the VOWS days also but it didnt get fleshed out and finished till Lovely started. That song kind of ties the EP together because the lyrics are about part of our experience together in Shadyside recording our later in the past EP down in Nashville in ’04.
None of the songs really had lyrics or vocals written to them until Wendell moved back to Dayton from Tennessee last summer and we all started playing together again and really began crafting the songs into what’s on our record.

What was the most difficult song to take from the initial writing stage through recording and mixing?  Why was it so troublesome?
Probably “knots…” because we had to re-record it just as we started the mixing process. So, the pressure was on because everything else was finished and we had to start from scratch with that song. We did this because we realized that in the breakdown towards the end of the song there was a noticeable tempo change. So in effect we had to change the way the drums come back in from how it was when we originally wrote it. It ended up turning out for the best because we knew we had to get it done so we just banged it out and were able to get Lokie and Justin to contribute vocals and make it more awesome.
Which of the songs on the record is most different from your original concept for the song?
“Spirits…” I’d say would be the most different but only in a subtle song arrangement sense. That song was originally shorter than whats on the record. When we were getting the vocals in place, Wendell suggested that we add a third chorus because he thought it was really good and the song was pretty short as it was. So we brought it back around and added the last chorus and chopped up the heavy part to end the song.
Did you have any guest musicians play or sing on the record?
We had Lokie Lewis and Justin Roseberry from When Sparks Fly sing on “knots…” It was an idea I had about halfway through recording and it ended up coming together really easily. Mainly because those dudes are awesome vocalists and had some good ideas once they heard the song. They both came over one night and we just worked it out on the spot basically. We all love those dudes and their unique voices and we have a lot of history with them so it was really great to have them be a part of it.
Who produced the record?  What input did that person have that changed the face of the record?
It was all self produced and recorded in my basement actually. We tracked it all ourselves and then turned it over to Mr. Micah Carli to mix it.
I’ve been recording demos for my bands and friends bands for years now so we decided to go that route to save some money. It was also good to do it that way because most of us have families now and it would be a lot harder for us to book a studio for say a weekend and be gone for days at a time rather than just record for a couple hours at practice on a week night. This way we could take our time and not stress about the ticking clock in a studio.
I think we all have been doing this long enough to know what we want when recording ourselves and what the appropriate input is in those situations, good or bad. We definitely weren’t striving for absolute perfection, just good solid, honest performances. I think Micah’s input from a mixing standpoint, while not necessarily changing the face of the record, really helped shape and polish the songs into what we wanted them to be. That dude’s the man!

Is there an overarching concept behind your new EP that ties the record together?
Not really. I mean, as I said before, “out on 17th” ties everything together in the sense that we have this history and shared experience and we’re finally getting back to making music together and having fun. I think a big part of that was revisiting those days and this older material and finishing what we started.
Have you begun playing these songs live and which songs have elicited the strongest reaction from your fans?
Yes we have. We’ve played about 5 or 6 shows now, since November, so we’ve had a chance to play everything on the EP live. We’re still kind of a new band and need to play the songs out more so we haven’t gotten a lot of reactions from fans yet but the feedback we’ve received from friends has been really positive on all the songs.
Although, now that I’m thinking about it, our show we did with The Story Changes back in May, we had a really strong reaction from this random dude in the crowd. He kept yelling at us and telling us we sounded like In Pieces. Then he got so excited he jumped up onstage in between songs to try and pump up the crowd for us. Then during our last song he jumped up onstage again and started trying to scream along. He stole my mic, so when my cue came to do vocals I had to kick him in the ass to get it back. Haha! It was pretty funny.
(Listen to the record here: http://lovelydayton.bandcamp.com.)