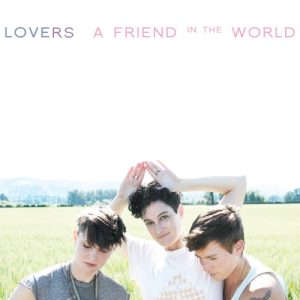 A Friend In The World

Lovers (celebrated lyricist Carolyn Berk, producer/performance artist Kerby Ferris, and producer/percussionist Emily Kingan) craft an intimate portrait of female friendship, sexuality, and evolution as an infinite process. The three first encountered in 2002 after Berk’s near-fatal van explosion while on tour with an earlier incarnation of the band. Emily Kingan, then on tour with classic Portland feminist hardcore band The Haggard, invited Berk to join the bill.  Ferris was their roadie.  Years later, Kingan organized a meeting for her two friends and future bandmates in South America, where Berk was traveling and Ferris was living and performing in various experimental electronic projects in São Paulo’s thriving music scene.  The result was sisterly love at second sight, and prophetic premonitions of the creative collaborations to come.
With their seventh album, A Friend in the World, Lovers fuse intimacy and empowerment into a modern atmosphere of honesty, new feminist humor, and rhythmic complexity. The result is at once arresting, tender and romantic. The new record is a rich engagement of acoustic and electronic extroversion and introspection- an uplifting ride into uncharted territories of the heart and mind. A Friend in the World is the follow-up to Lovers’ celebrated 2010 album Darklight and the second for the band as a trio. A Friend in the World is being released by Badman Recording Co. September 24.
Ghettoblaster caught up with Berk, Kingan and Ferris to discuss the record before they head out on tours of the US./.U.K./Europe in Fall 2013.
When did you begin writing the material for your most recent album?

Carolyn Berk: Maybe two and a half years ago, I guess maybe three years ago… the oldest songs on the new album are “James Baldwin and the Diagonal Trance” and “Lavender Light”.
Emily Kingan: We had started versions of those two songs in late 2010, I believe. And I am sure Cubby had started on those songs even before I got my hands on them. I think that is how a lot of artists work though. I know some artists who collect songs for 10 or more years before they finally are released to the world.
C: Yeah, I have to keep writing songs just for my own engagement in my life and for mental health and hopefully it’s a good thing for the movements, the various movements.
Kerby Ferris: “Wild Horses” was the first song I really dug into on this record production wise, and that was the first song we ever produced in software first–working our way back to hardware from there.  I love the mood we ended up with and the effect this song has in a space.
What was the most difficult song to take from the initial writing stage through recording and mixing?  Why was it so troublesome?
E: I think this one was “Girl in the Grass”. We knew this song had a lot of potential and we wanted to fully realize it. It went through many versions before we got to the finished product. And now, even so, we talk about other ways we could flesh out this song. It could go further yet.
C: “Girl in the Grass” is really a very visceral song for me – very emotional. There’s longing and then there’s release. And that felt like a really precious thing for me. We wanted to do our best finesse of breath – the right lightning.
K: I agree about “Girl in the Grass”.  Sometimes I think I love this song too much to ever feel done with it.
Which of the songs on the record is most different from your original concept for the song?
E:  I would say either “Tiger Square” or “Rocket Ship”. “Tiger Square” turned into such a rhythmically complex and strange song, and one of the ones I love the most. “Rocket Ship” also took a huge turn and went from a simple guitar song to a hip-hop dance song and then to where it is now, sounding sparse and a little sinister.
C: I think it has to be “The Modern Art Museum of the Modern Kiss Goodbye”. I don’t even know where that song came from. And what Kerby came back with was so expansive, it took it up to the stars! Or it could be “Oh Yeah”, that song didn’t even have a chorus before we recorded it. Or maybe “Wander Through the Time of Hearts”, but it could be all of them! They all have changed so drastically.
K: “Tiger Square” involved a lot of experimenting and really became its own person.  I love the weird way it turned out.
Did you have any guest musicians play or sing on the record?

E:  No, that was all us!
Who produced the record?  What input did that person have that changed the face of the record?

E:  Dylan helped us produce “Girl in the Grass”. He felt really connected to that song and had a lot of ideas for it.  At the same time, we were feeling pretty stuck, and wanted a new perspective. Andy LeMaster did some producing too. He helped on the songs “Oh Yeah” and “Rocket Ship” by making subtle changes to the arrangements that made everything pop. However, we did not have a formal producer on this album aside from that. We spent about three months producing the record ourselves. I think this focused time really made the record what it is.
K:  Though we didn’t work with a producer, Dylan, Adam and Andy had lots of awesome ideas and feedback for us to consider while recording and mixing this record.  All three were awesome to work with.
Is there an overarching concept behind your new album that ties the record together?

C: Yes I think so. I see it as a group of poems or short stories or a dream sequence or a play as much as I see it as an album of songs. And what that is for me, to me it’s a kind of soft voyage in the spiritual realm. Because this is how I till the soil emotionally. I think it’s a search and a sort of hopeful resolution to listen to the heart and not get lost in other people’s perceptions or interests. It’s just a little yoga for the heart lines. It’s a check in with the self. Losing yourself, re-connecting with the self. Losing each other, re-connecting with each other. Growth. Change. And a clarification of certain things for myself. So this is that practice and the product. The simultaneous voyage and homecoming. And it’s a love album, let’s be real.
E: On the production side, Kerby and I talked a lot about trying to expand our creativity to a new realm. The last record, Darklight, was recorded mostly with this Roland sequencer I have, which was limiting in a lot of ways. On this new record, we used some vintage sound equipment, but mostly we used software. Our goal was to break out of the confines we had become accustomed to, and play with tempo and arrangement and open ourselves to new possibilities.
K: Yes, there’s a lot of growth in this one, in all the forms that growth take.  It was fun to learn the things we needed to learn in order to make it all happen.  I feel like a different person than I was before this record existed.
Have you begun playing these songs live and which songs have elicited the strongest reaction from your fans?
E: Yes we have! The songs people really seem to like are “Wild Horses” and “The Modern Art Museum of the Modern Kiss Goodbye”. People really bop their head and dance to “MOMA”.
(Visit the band here: loversarelovers.com
https://www.facebook.com/pages/Lovers/69708633343
badmanrecordingco.com)