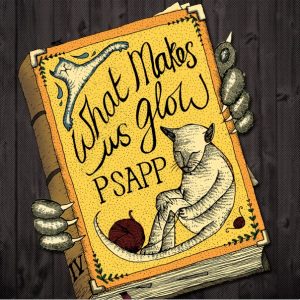 What Makes Us Glow

Comprised of feline wilding troubadours Carim Clasmann and Galia Durant, Psapp met 12 years ago and have been making music ever since. Their latest offering, What Makes Us Glow is Psapp’s fourth full-length record and will be released through The state51 Conspiracy on November 11. What Makes Us Glow is a vast hyper-color psychedelic whirl of an album, with intricate orchestration, layered vocals and a pioneering spirit. These songs thrum, buzz and of course, glow.
Scored with home built instruments, What Makes Us Glow is bursting with swampy drones of recorded ambience and plenty of raw sounds.  Psapp relish in combining unusual musical elements (this record includes Galia’s rhythmic snores, boxes of writhing mealworms, their homemade boneaphone – a marimba made from bones – and the groans of milk-laden cows) alongside the more standard instruments: piano, violin, oud and organs.  Lyrically it is an exercise in emotional stocktaking. These are songs of attachment, detachment and the slow realization of what is essential. This is not the sound of a band finding their way; it is the sound of band having arrived at their destination. There is a powerful sense that they are in full control of their sound and reveling in the possibilities.
Ghettoblaster recently caught up with Clasmann and Durant to discuss the album.  This is what they told us.
When did you begin writing the material What Makes Us Glow?
Carim: We started slowly in 2010, warmed up a little in 2011 and got to full pace in 2012 – there was a big burst of excitement and sudden flurry and that’s when most of it was completed.  We worked partly in a friend’s studio this time which was a little odd as we’ve done everything at our place before, but once you break your mental barrier, get used to the lighting, and enter full music mode then it is fine.
What was the most difficult song to take from the initial writing stage through recording and mixing?  Why was it so troublesome?
Carim: Arranging “The Well And The Wall” was quite tricky as there were dozens of tracks within the song that we liked but also threatening to ruin the spare atmosphere of the song. It took us a while to feel good about leaving out all those nice noises we painstakingly created but they would have created a classic example of “more is less”.
Galia: This is an ongoing struggle with us – we have a tendency to fill up a song with layer upon layer of noises and then we have to execute the cull. It’s a tough part of the process. My favorite bit is definitely the bit where we load our plates with sound. Like a noise buffet.
Which of the songs on the record is most different from your original concept for the song?
Galia: We rarely start out with a definite concept – we more work on atmospheres and feelings to see where a song takes us. Because of the nature of our songwriting process – the way we layer up sounds and experiment with noises as we create a track, it would be hard to say which was most different from the start. They’re ALL so different from the start – for a lot of tracks the starting point will be a block of wood or a children’s toy or an insect.
Did you have any guest musicians play or sing on the record?
Carim: Yes, Alessandro Palmitessa plays the saxophone on “The Well And The Wall”. He’s a friend of mine and every time he comes to visit he brings his clarinets and various types of saxophones. On our last album – The Camel’s Back – he plays on two tracks as well. His own music is more in the direction of jazz and experimental, but he also founded an orchestra with mainly homeless musicians. But that’s it for this album so as always it’s mainly Galia and me.
Galia: Yep – we had one saxophonist, one baby, one cat and a chorus of mealworms performing on the record. They were all excellent performers, but we wisely kept them separate throughout the recording process.
Who produced the record?  What input did that person have that changed the face of the record?
Carim: We always produce our records ourselves as production is an integral part of the songwriting process. We never tried to work with a producer and I think that person would have a hard time as we know what we like and where we want to take a song.
Galia: I would hate to be an outside producer turning up to try and produce us, I can imagine bloodshed, tears and maybe even the odd hospitalization.
Is there an overarching concept behind your new LP that ties the record together? If so, please share.
Carim: The clue about the concept or theme is in the title of the album – many of the songs are explorations into our lives now, the things that make us burst with joy or crumple in despair – often these feelings are wrapped up in the same song.
Have you begun playing these songs live and which songs have elicited the strongest reaction from your fans?
Carim: Converting the album versions in songs to play live doesn’t always work, especially on the more soundscape-like tracks. Usually we manage to play a third to half the tracks of each album live.
We’ll play a gig at the release party for the album so we’ll let you know!
(Enjoy Psapp’s “Everything Belongs to the Sun” here:
https://soundcloud.com/psapp/everything-belongs-to-the-sun)