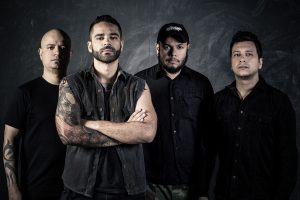 Eminence’s new album, The Stalker, to be released on August 13. Marking their first album since 2008’s highly regarded The God Of All Mistakes, The Stalker finds the Brazilian outfit’s extreme approach to melodic metal pushed even further. Such can be heard with the song “No Code,” a lyric video for which was premiered by Metal Injection (available below).
Recorded at Minerio de Ferro Studios in Belo Horizonte, Brazil, The Stalker reunites Eminence with Danish producer Tue Madsen (Moonspell, The Haunted, Sick Of It All), who also produced The God Of All Mistakes. The album also boasts Sepultura bassist Paulo Xisto Pinto Jr. (who appears on three tracks, including “No Code”).
Eminence made its live U.S. debut this past fall during New York’s CMJ Music Marathon, while sailing the Hudson River on a boat with Prong. That performance led The Village Voice to declaring Eminence as “a band to watch.” The band made a triumphant return to the States last spring at SXSW, with plans for a proper North American tour in the works. Before that, though, Eminence will embark on a European headlining tour later this summer.
Ghettoblaster had the opportunity to discuss The Stalker with Eminence vocalist Bruno Paraguay recently.  This is what he said about it.
When did you begin writing the material for your most recent album?
Well, I think the first song off this album was created in 2011. “Eyetricity” was the first one. And in 2012, we began to bring the ideas to our studio and try to put all the influences, riffs and lyrics together.

What was the most difficult song to take from the initial writing stage through recording and mixing?  Why was it so troublesome?
For me, it was the title track to The Stalker. That’s for sure [laughs], because it was the last song created, 2 days before of the end of the recording! Alan [Wallace, guitars] came to the studio and said “Hey guys, I have a new riff for one more song…” So we had no idea of what to do, but it’s great and is the most brutal song of this album!!
Which of the songs on the record is most different from your original concept for the song?
The song “Critical Path” because we decided to use some new elements like classic guitar and samplers. It ended up being totally different from the first concept.

Did you have any guest musicians play or sing on the record?
Yes! Paulo Xisto from Sepultura and PJ from J.Quest (a Brazilian band as well) on the bass. Rogerio Delayon in some songs is playing second guitar.
Who produced the record?  What input did that person have that changed the face of the record?
Tue Madsen was the producer. Tue Madsen always has a lot of opinions of everything. He always tries to get the best of you, and his passion with the metal music makes our record more true and cohesive with ourselves.

Not exactly, but our inspiration comes from our lives, society, desires, frustrations. I believe the good and bad feelings that we can see around the world becomes a concept to everyone.

Have you begun playing these songs live and which songs have elicited the strongest reaction from your fans?
Not yet. Our new tour starts this October in Europe and then in South America, and we’re very excited to see what kind of energy these songs will provide to us and our fans. Can’t wait!
Watch the lyric video for “No Code” here: http://www.metalinjection.net/video/eminence-no-code-lyric-video.
Eminence’s album now available for free download. Get it here: