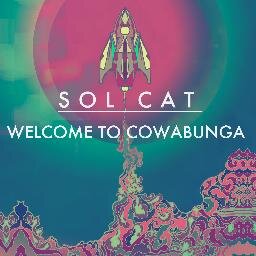 Before landing in Nashville, Sol Cat’s members spent their time across the country, from Miami to Los Angeles, New York City to the Gulf of Mexico. Musical influences span just as wide, yet an eclectic and oceanic resonance remains prevalent in their sound. With George McCrae-inspired grooves, semi-psych synth layers, bouncy bass and slick guitar riffs reminiscent of The Talking Heads, it’s no wonder Sol Cat was just named The Nashville Deli’s Artist of the Month. The band puts on an energized, electric live show that The Deli explains, “brings out the best dance-rock music that will get your bodies moving.”
Today the psychedelic groove-rock six-piece  are kicking off the Fall by releasing their latest EP Welcome to Cowabunga. This EP is a follow-up to the band’s self-titled LP, which was released earlier this year and debuted at #142 on the CMJ Charts.
Ghettoblaster recently caught up with singer Brett Hammann, to discuss the sextets latest release.  This is what he told us.
When did you begin writing the material for your most recent EP?
Ummmm, I think most of these songs were written earlier this spring. It’s hard to remember exactly when. We are constantly demo-ing new tunes so I think these have been aging in our Ableton casks for a while.
What was the most difficult song to take from the initial writing stage through recording and mixing?  Why was it so troublesome?
Well we usually write and do the initial recording at the same time. Once its down and we have played it live for a few weeks we usually feel pretty good about hopping in somewhere to start the finished product. “Ups & Downs” was probably the most difficult. There is kinda a lot going on in that one.
Which of the songs on the record is most different from your original concept for the song?
Probably the same one. It was pretty, “electronic” before everyone got their hands on it. The original keys part was a little too gnar to pass up. Jer Unleashed has some hungry fingers.
Did you have any guest musicians play or sing on the record?
Just the cats.
Who produced the record?  What input did that person have that changed the face of the record?

We produced it with some help of engineer Jeremy Ferguson. He runs Battletapes and is also running for President. He also possesses certain mystical synth powers which we used on a few of the songs.
Is there an overarching concept behind your new EP that ties the record together?
Mainly space. We are currently messing with circus and space, but this batch is predominately space. And chicks.
Have you begun playing these songs live and which songs have elicited the strongest reaction from your fans?
Yeah we have been playing all of them for a while. It’s hard to tell which one goes over best. I know “Keep Your Heat” can get some folks moving a bit from time to time.
(See Sol Cat on tour here:
Oct 03 – Nashville, TN @ Mercy Lounge **Sol Cat EP Release Show**
Oct 05 – Ames, IA @ The Maintenance Shop
Oct 08 – Louisville, KY @ Zanzabar
Oct 14 – Chapel Hill, NC @ Local 506
Oct 16 – Brooklyn, NY @ Freddy’s Bar Showcase (9pm)
Oct 18 – New York NY @ CMJ Music Marathon, Sullivan Hall (7:45 pm)
Oct 19 – New York, NY @ CMJ Music Marathon, Rockwood Music Hall (5pm)
Oct 19 – New York, NY @ CMJ Music Marathon, The Studio at Webster Hall (8pm)
Nov 15 – Bowling Green, KY @ Tidballs
Nov 16 – Knoxville, TN @ The Bowery w/ The Weeks
Nov 19 – Lexington, KY @ Cosmic Charlie’s
Nov 20 – PIttsburgh, PA @ Club Café
Nov 22 – Louisville, KY @ Zanzabar
Nov 23 – Chicago, IL @ Beat Kitchen)