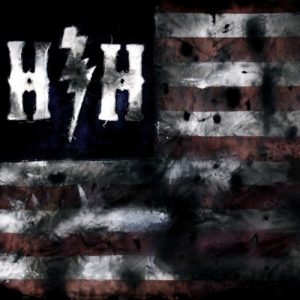 Hell or Highwater is the rock band founded by Brandon Saller best known from the metalcore band Atreyu. While his main band is on a self-imposed hiatus, Saller is staying busy and creatively stimulated with Hell or Highwater and will release their debut, Begin Again via Pavement Music on February 5.  First, the band will hit the road with ‘80s glam metal revivalists The Darkness (dates below).
Ghettoblaster caught up with Saller a few days before the tour to discuss the forthcoming record.  This is what he told us about it…
When did you begin writing the material for your most recent album?
I started about 2 1/2 years ago.
What was the most difficult song to take from the initial writing stage through recording and mixing?  Why was it so troublesome?
To be honest, none of these songs have given us much struggle. I think that the songs had been waiting to be written for a while so they just poured out.
Which of the songs on the record is most different from your original concept for the song?
“Crash & Burn.” There’s a lot of riffing and guitar work that came from Matt that was unexpected. Ended up making the song.

Did you have any guest musicians play or sing on the record?
Yes. My buddy Shadows from Avenged Sevenfold co wrote and sang on the song “Go Alone.”

Who produced the record?  What input did that person have that changed the face of the record?
Fred Archambault produced and mixed the album. He’s really great at letting a band be a band and bringing out the best. He’s also untouchable with tone. He makes things sound incredible.
Is there an overarching concept behind your new album that ties the record together?
Sort of. A lot of the songs kind of portrait the concept of the underdog…but in a good way. The underdog can always grow and rise up. It’s about not being afraid of life and doing what you dream of. Starting over. Reinvention.
Have you begun playing these songs live and which songs have elicited the strongest reaction from your fans?