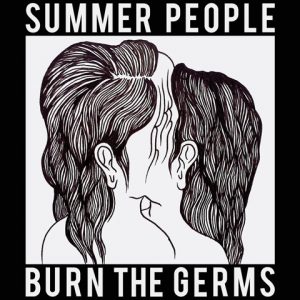 In support of their upcoming album Burn The Germs, upstate New York’s spastic punk rock wrecking ball that is Summer People have premiered the upcoming track from their new release, titled “I Do What I Want” exclusively at BrooklynVegan.com.  Touring relentlessly in their veggie-oil van — playing Austin City Limits, SXSW 2012, the Foburg Music Festival, and college shows along the east coast — they have shared the stage with a diverse palette of artists such as Wavves, Tera Melos, Young Widows, Marnie Stern, The Pains of Being Pure at Heart, Parts and Labor, Balance and Composure, The Octopus Project, Kayo Dot, Polar Bear Club, and, amusingly, Fountains of Wayne.
Summer People’s music has been described as “punk rock meets lounge-side crooner on a twisted bender from hell,” blending “painfully beautiful blues, erratic punk, and even rhythm-heavy salsa, recalling traces of the Cramps with a Nick Cave delivery.  Ghettoblaster caught up with SP’s Brandon Musa to discuss Burn The Germs and this is what he said about it…
What was the most difficult song to take from the initial writing stage through recording and mixing? Why was it so troublesome?
“Good Stuff” was definitely the sore thumb of the record, probably because it was written on a sunny day. When we started playing it in the studio we found that the tempo was too peppy and it came off a little brighter than we had anticipated. We eventually just had to slow it down and get sludgy, playing the parts with a little less emphasis on precision. The vocals also needed the same makeover, so Alex basically worried less about the melody and focused more on the vibe. The mixing was tough because we found that a lot of noises were more interesting so we pulled the riffs down considerably and let the feedback and grime get the spotlight. It felt a little strange at first but it ended up helping with other songs later on.
Which of the songs on the record is most different from your original concept for the song?
“Proud,” a song that existed as a melody first and had to be interpreted in a very short period of time.
Did you have any guest musicians play or sing on the record?
Hunter Davidson (Underground River) threw down some keyboards on the aforementioned song, “Proud.”
Who produced the record? What input did that person have that changed the face of the record?
Again, Hunter Davidson also produced it. He kept it real for us, reinforcing the idea that it’s best to keep it raw and not dress shit up.
Is there an overarching concept behind your new album that ties the record together?
There was no cognizant overarching theme, but the album certainly reflects where we were as a band and individuals during that time, so it’s probably about being poor and homeless. Destitute rock.
Have you begun playing these songs live and which songs have elicited the strongest reaction from your fans?
Yep. The song that seems to get people the most excited is “Dressed to Play,” a killer note to end on.
(Catch the band at one of these dates:
April 20th, Binghamton NY @ The Beagle Pub (CD release show) w/ Underground River and more TBA
May 9th Fredonia, NY @ BJ’s Fest w/ Goldmines and others TBA
May 10th Buffalo, NY @ The Jungle Gym w/ Goldmines and others TBA
May 11th Rochester, NY @ The Bug Jar w/ Goldmines and others TBA)