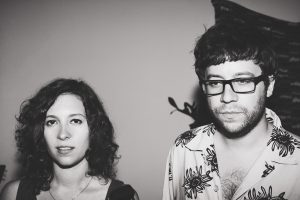 This Frontier Needs Heroes have spent the past five years playing shows all over the world. Just Brad and Jessica Lauretti with a guitar and a tambourine, and their voices, logging thousands of miles in their car, touring the greatest cities of North America and Europe, selling one record at a time, making one fan at a time. This determination and DIY ethos brought them on an epic journey around the world, playing in clubs, houses, and festival stages.
After two successful albums under their belt in which they explored their stripped down alternative folk arrangements, This Frontier Needs Heroes decided to try something different. The name of the band, a reference to Woody Guthrie’s famous WWII-era guitar graffiti “This Machine Kills Fascists” didn’t just apply to its core members Brad and Jessica Lauretti, but it’s also an invitation for everyone to become a hero in their own right.
Their new album Hooky, recorded in the summer of 2012 on two-inch analog tape at Dr. Dog’s studio in Philadelphia with the help of Loveland Recording’s Nathan Sabatino, was made with the contribution of a full band, making Hooky their most richly realized and, yes, hookiest album to date.
Ghettoblaster caught up with Brad to discuss the record, which will be self-released on August 27.  This is what he said about it.
When did you begin writing the material for Hooky?
The first two songs on the album, “Hooky” and “George Clooney” I wrote in Los Angeles two years ago.  I was on a wander by myself visiting friends in California.  I had no money at the time.  Jessica told me to write a hit song, and she sent me $100 for food.  I ended up hitching all the way back to Brooklyn through Jacksonville, FL.  The rest of the songs on the album, are songs that I’ve written over the years that I felt really needed a full band to arrange them properly.
What was the most difficult song to take from the initial writing stage through recording and mixing?  Why was it so troublesome?
The most difficult part is just getting everyone together to do it!  With Jessica in NYC, me living in Florida, and the rest of the musicians on the album spread out across the U.S. and working on their own projects it’s hard to coordinate.  Plus Nathan, the engineer, lives between Philadelphia and Tucson so we ended up recording the album in a lot of separate pieces over about six months including Philadelphia, Brooklyn, and Jacksonville, FL then we emailed him all the files to mix!

Which of the songs on Hooky is most different from your original concept for the song?
I would say “It’s Over Now” between the awesome drum beat that David Rogers-Berry (O’Death) came up with and finishing it off with Sitar (Arvid Smith) that song really came alive during the recording process.  It just goes to show, to never give up on a song that you really like.  The other versions I recorded were too solemn, and didn’t transmit the true spirit of the song.  This version is inspiring.

Did you have any other guest musicians play or sing on the record?
Matt Adams from the Blank Tapes played Electric Guitar on a few tracks.  He stopped at Nathan’s Studio in Tuscon, AZ (Loveland Recording) on the way back to the West Coast.  They played a show in Jacksonville, and we listened to the songs in the car on the way to the beach, and then he just went into the studio and ripped it.  We toured with The Blank Tapes last year, and we played together live before.

Who produced the record?  What input did that person have that changed the face of the record?
We produced it ourselves.  We have never had a producer per se.  We rehearsed the songs with the band, and everybody just played what they wanted to until we all liked the tempo and feel, as far as singing the songs goes.  Then Jessica and I did whatever overdubs we wanted, and we added whatever elements we felt like the song needed, based on whatever musicians I was playing with at the time.  We don’t really have a sound other than trying to sound like ourselves. So we didn’t need it.

Is there an overarching concept behind your new album that ties the record together?
Yes it’s funny how overarching concepts kind of find you.  This is our third album, and I really wanted to call it “Never Give Up” because that is what the album meant to me.  Jessica immediately vetoed that because she said it sounded too “dorky”.
Music truly is a labor of love for us, and it consumes a lot of time and resources.  The title track “Hooky” is a song to myself convincing myself to keep doing this.  The way our society measures value, based on popularity, YouTube hits, its kind of depressing when you see what people are actually watching.  “Hooky” has a double meaning what constitutes a “Hooky” song/hit, and playing “Hooky” on your true self.  In the end an artist only has to justify his/her work to themselves, and a few friends.
Have you begun playing these songs live and which songs have elicited the strongest reaction from your fans?
I think “George Clooney” and “Lonely Swedish Girl” are definitely audience favorites.  We have been playing those songs for a while now as a duo, but “Hooky” and “It’s Over Now”, and “Down on the Farm” are really powerful as a full band, we can’t wait to take the full band on the road!
(Find out more about This Frontier Needs Heroes here: www.thisfrontierneedsheroes.com.)