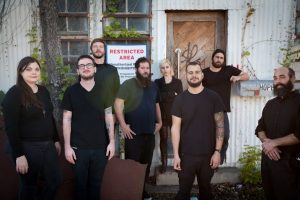 East Cameron Folkcore wants to bring back a sense of social consciousness that they feel has been missing from much of today’s music. Formed in the Northeast Austin neighborhood that they’re named after, the eight-piece orchestral group pieces together folk, country, blues and punk to create a unique sound that represents the poor and downtrodden while expressing the disgruntled and under employed youth they have found themselves a part of. The updated lineup includes long time Gorilla Biscuits drummer, Luke Abbey. ECF released the cinematic concept album, Kingdom of Fear on April 17 via Nine Mile Records.
Kingdom of Fear is a critical inventory of our world in 2014: From surveillance state to turbo capitalism, from plundering nature to corruption in economy and politics, from exploiting bosses to arbitrary policemen. If previous album For Sale was the key to open the door to the outside, Kingdom Of Fear is the boot that crashes the door into pieces letting everything in: Light, Knowledge and truth, which are so glistening bright and obvious that nobody can be neutral and try to say: I didn’t know anything, I didn’t hear anything. It has the power of punk, the humility of folk, gospel choir and banjo-twang, fist and soul. It’s Jack White meets Tom Waits, melancholic cello-line meets in-your-face-power riffs, spartan introspection meets baroque opulence.
Kingdom of Fear was recorded over the first half of 2014 and mastered by Howie Weinberg. In August of that year, ECF headed overseas to Europe for a month of club shows and festival dates that included stand out sets at Haldern Pop Festival, Serengeti Festival, Winterthur Festival, Chiemsee Festival, Sounds of the Forest Festival, Noorderzon Festival and more. ECF will return to Europe in May for European Festival performances at Pink Pop Festival (NL), Greenfield Festival (CH), Hurricane and Stateside Festival (DE) and more.
Ghettoblaster recently spoke with Blake Bernstein and Jesse Moore about the record.  This is what they told us.
When did you begin writing the material for Kingdom of Fear?
Blake Bernstein: The first set of songs was written almost two years ago. We’ve been steady writing since then and by the time we went into the studio we had a list of over 30 songs to choose from. Some songs weren’t finished until we began the recording process.
What was the most difficult song to take from the initial writing stage through recording and mixing?  Why was it so troublesome?
Jesse Moore: Ironically enough, the most troubling song to write and record was the last song “Goodbye to Fear.” Originally this was a full four-minute tune with verses and a chorus but figuring out how to end this record proved a bit of challenge. It wasn’t until we created the ending musically piece leading into “Goodbye to Fear” that it felt complete to just make the song a very simple statement of purpose.
Which of the songs on the record is most different from your original concept for the song?
Blake Bernstein: “Newspeak.” This song originally had a different title and was written about the situation my roommate and band member Phil Patterson and I shared; returning from tour and having to move out our homes where we lived with significant others. The song was almost entirely re-written while the melody remained the same. It now reflects the situation we all find ourselves in; government lying and spying and the rights we unwittingly gave up just by having cell phones and emails.  Living in the real world once only imagined by Orwell.
Did you have any guest musicians play or sing on the record?
Blake Bernstein: No. We want our live shows to reflect what you hear in recordings. So in lieu of bringing in new musicians, we picked up new instruments like trumpet and saxophone. We have brought in guest artist in on past albums and in one instance, we made one of them a full time member (Mary Beth Widhalm – Cellist).
Who produced the record?  What input did that person have that changed the face of the record?
Blake Bernstein: Founding member Jesse Moore produced this album alongside our in-house sound engineer Chris Seyler. Jesse was the architect for this album; Whittling down 30+ songs to 14 to work as one cohesive piece of art.
Is there an overarching concept behind your new album that ties the record together?
Jesse Moore: The overall concept of the record is just to shine a mirror on the issues that are happening around us and to document the modern human condition through an empathetic perspective.
Have you begun playing these songs live and which songs have elicited the strongest reaction from your fans?
Blake Bernstein: We’ve been playing sections of this album live for over a year now. “Our City” possible has opened up the most dialogue between our fans and us, especially the hometown ones. It’s a story told from the point of three different people asking the same question, “What have you/we done to our city?” Through gentrification and a lack of responsible growth, Austin and other cities are becoming increasing difficult to afford to live in. I’ve had people come up me to after shows saying they just moved here and live in a prominent zip code, asking me how they’re supposed to feel about that song and if I think they’re the problem. My answer is usually, “Yes, we all are.”
Check out the band’s video for “Kingdom of Fear Pt. 1” here: