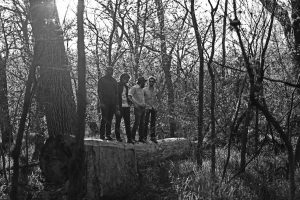 From the small strange town of Denton, Texas, comes a small strange rock band called Birds of Night. Their new, self titled album is set to be released on April 21, 2015. This will be the third full album the band has produced in the past four years, and it’s by far their strongest and darkest work to date.
Birds of Night is an album that finds itself in many places on the diverse topography of rock and roll. It begins with the pounding relentless groove of “Dark,” then dives to the Sabbath-y fuzzed out haze of “Desert Reflections,” and closes with the heartbreaking space age anthem, “Asleep in the Pine.” It’s an album that was developed in the old tradition. The songs were written and played live for over a year before they were recorded, and the songs were tracked in four days. Birds of Night was masterfully produced by Midlake drummer McKenzie Smith at his studio, Redwood. Though the album meanders along a wide path of influences, Smith’s artistic production helped stamp a clear identity on the sound of the record and the band.
The band is currently planning a tour to support their upcoming release (dates below).
Ghettoblaster recently caught up with Jon Aisner and Andrew Rothlisberger to discuss the album. This is what they said about it.
When did you begin writing the material for Birds of Night?
Jon: Once we finalized our new lineup, about a year ago, these songs really began to take shape Andrew had many of them written in some form for a long time, but it took all the pieces coming together to get them to a place where we felt we could record and perform them.
Why self-title your third LP?
Jon: We went through a lot of names. We had a white board and everything. But as it turns out, all the good ones are taken. Ultimately, we decided to self title it because this album is most true to the sound we’ve been looking for.
Andrew: I agree,  this record feels the most true to our identity as a band, and it’s a direction that we’re going to be exploring for years to come.
What was the most difficult song to take from the initial writing stage through recording and mixing?  Why was it so troublesome?
Andrew: Probably “Asleep in the Pine.”  We had to come up with some guitar harmonies, map out the jammier pieces, and figure out how to make the whole thing huge.  We actually recorded several demos of the track before we even walked into the studio.  It was a lot of work, but we ended up with what is probably our most “epic” track.
Which of the songs on the LP is most different from your original concept for the song?
Jon: “Marfa Skies.” Originally, when we wrote it and started playing it, it was faster with a lot of flourishes. When we got in the studio McKenzie got us to rework it to a simpler groove and slow it down and we’re very pleased with how it came out.
Do you have new music in the works?
Jon: We do! We just recorded a song for Converse RubberTracks. not sure the plan for that yet and we have another that we recorded that didn’t make the album. maybe a B side.  Otherwise, we are always writing and trying to develop something new so no one gets bored with us.
(Catch the band live here:
04.25 • Three Links (Dallas, TX – CD Release Show)
04.30 • Swan Dive (Austin, TX)
05.01 • 502 Bar (San Antonio, TX)
05.02 • Madness on Main Street (Houston, TX)
Visit them here: https://www.facebook.com/thebirdsofnight.)