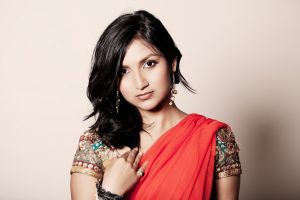 Based in Los Angeles, Bhavana Reddy (daughter and principal disciple of world renowned Indian dancing couple Dr.s Raja and RadhaReddy) is about to self-release her self-produced debut EP Tangled In Emotions, in February of 2014. The EP reflects the work of prominent engineers including John Would (engineer on Fiona Apple’s 2012 Grammy-Nominated album) and Reuben Cohen, from Lurssen Mastering (Slumdog Millionaire, Game of Thrones, Snoop Dogg).

In addition, the EP boasts phenomenal guest musicians, including percussionist Blair Shotts (Rihanna, Drake, Adam Lambert), tablist Salar Nader (Lil’ John, Shaggy, Ustad Amjad Ali Khan) and violinist Ray L. Suen (Flaming Lips, Mariachi El Bronx) to do justice to the complexities of an eastern-western blend of cultures.
Bhavana’s music is an interesting blend of the Indian concept of melodies and the western concept of harmony held by a string of poetry. Her melodies, involuntarily chosen from the 72 parent ragas (scales) of Indian Carnatic music sung to chords/harmonies of blues/ jazz/pop/rock/folk influence, create an exotic neo-psychedelic vibe with strong emotional vocals. Her music has been described as a melting pot of eastern and western genres with hints of Fiona Apple, Kimbra, Dead Can Dance, and Led Zeppelin. Her performances are visually in sync with theatrical/story telling nature of Kuchipudi dance. As a whole, Bhavana’s music plays with the essence of rich Indian heritage in a language known to you.
Ghettoblaster recently caught up with Reddy to discuss the EP.  This is what she told us.
When did you begin writing the material for Tangled In Emotions?
I began writing it a year back while I was at my school Musicians Institute thinking I was in midst of a writer’s block. Out of nowhere I had an idea for a lyric and things were just flowing. Tangled In Emotions is about a pessimistic lover trampled by past loved ones and afraid to give her heart away to her new lover. She is scared to let her guard down despite the love and affection he displayed towards her, she says ‘Don’t cry for me lover, For all I can feel is dolor (sorrow)’
What was the most difficult song to take from the initial writing stage through recording and mixing?  Why was it so troublesome?
I actually had most of the songs worked out as demos. There was no trouble at all. We knocked the songs down live with drums/ bass and guitar simultaneously on one day followed by keys, violins, indian and western percussion and finally vocals. Things just flowed in the recording stages.
Mixing wise we had to spend more time on “She”, “Tangled In Emotions” and “Stuck In A Valley”. With “She” and “Stuck In A Valley”, I had vocals effects/ panning that we worked a little longer on. On “Tangled In Emotions” and “She”, we found ourselves playing around with the Tabla and Bongos. Turning it a db or two lower / higher and trying to just find the right blend that sounded just right!
Which of the songs on the EP is most different from your original concept for the song?

“Stuck In A Valley.” My original concept for that song started as a layered vocal harmonies — a cappella piece with a djembe with flute and violin in some sections. There are so many possibilities with that song, the other day I was experimenting singing that song in an odd time signature over an underlying Indian Percussion Rhythm Pattern which I still have recorded as voice notes on my Iphone. It’s such a rich song. Like Indian music, it is based on one chord and there is a play of melodies and rhythms.
However on the EP, the song ‘Stuck In A Valley’ is fully electric with a running electric bass line, full drumkit, eastern feeling guitar melody and flute melody over the chorus, eventually ending with an afro-cuban instrumental section and further stripped down to just voices.
Did you have any guest musicians play or sing on the record?

I do in fact have guest musicians who helped to further bring out the uniqueness of the production.
On all four songs we had, Ray L. Suen on violins (Childish Gambino, The Killers, Flaming Lips) who did a phenomenal job playing melodies just as I sang them.
Blair Shotts (Rihanna, Drake, Adam Lambert) played percussion on “She”, “Tangled In Emotions” and “Stuck In A Valley”.
Salar Nader (Ustad Zakir Hussain, Shaggy) played Indian Tabla for “Tangled In Emotions”, Dholak for “She” and Udu for “Stuck In A Valley”.
Michael Feldman on Piano for “Tangled In Emotions”.
Cliff Retallick & Duy Tran playing additional Key pads.
Who produced the record?  What input did that person have that changed the face of the record?

I produced the record. That’s just how I write my songs, I produce them too. When I’m writing a song I stay up nights and nights thinking about it and I cannot rest till I’m satisfied with it. I usually take my time working on a demo on my mac’s logic software and then bring it to my bandmates and best mates Dennis Nilsson (Drums) and Kevin Lambertucci (Bass).
Is there an overarching concept behind your EP that ties the songs together?
They are connected to my frame of mind towards the end of 2012 and beginning 2013. We are complex human beings and each of those songs are written for different stories behind them. My mind works in dark ways and when writing, I find beauty in melancholy. Writing inspires melancholy and vice versa, although the latter is more often.
Have you begun playing these songs live and which songs have elicited the strongest reaction from your fans?
Yes in fact, I’ve done shows including the Devi Fair at the Witzend last year, Trip Santa Monica, etc. The audience reaction has been overwhelming for the songs, however ‘Smells Like Rain’ in particular has brought people to tears and to their knees. Some of my most unforgettable experiences with audience came with that song. To have someone at my feet after a concert was something I have seen a few times in my career as a dancer but as a musician I didn’t imagine such a reaction. I am deeply humbled by it and feel like I’m doing something right!
(Visit Reddy here: http://bhavanareddy.com/.)