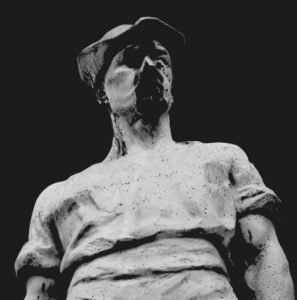 Pooling together a group of influences as diverse as its members, Bestial Mouths present a raw, synth-driven energy propelled by singer Lynette Cerezo’s powerful vocals. Often likened to Diamanda Galas, Siouxsie Sioux or Lydia Lunch, Cerezo delivers each note with fury and abandon.  Synthesists/keyboardists Christopher Myrick and Gustavo Aldana channel early industrial, EBM, goth and minimal synth pop in turns, blending harsh electronics and lush melodies. When fused to Aldana’s splintered programmed beats and the tribal rhythms and samples of drummer Jessica Reuter, the harmonics combine to breathe new life into post punk, weaving their own distinct creation in the process.
Bestial Mouths released their debut album in 2011 on Dais Records. In 2012, the band released a live cassette recorded from a performance supporting the legendary Psychic TV through Black Horizons. Later that year, the band performed at SXSW and toured Europe, performing in Germany, France, Belgium, Denmark, Hungary and the Czech Republic. Last March, the band releasing a split 12 inch with Deathday on Sweating Tapes/Desire Records.  Most recently, the band has a brand new LP produced by Egyptrixx, which was released in June 2013 on Clan Destine Records.
Ghettoblaster caught up with Cerezo, Myrick and Aldana on the tail end of their U.S. tour to discuss their latest LP.  This is what they said out it…
When did you begin writing the material for your most recent LP?
We started working on it right after we got back from Europe last November. (Christopher Myrick)
We were really excited to begin writing new material. We had played those songs for awhile and had so many new ideas to put to use. (Lynette Cerezo)
What was the most difficult song to take from the initial writing stage through recording and mixing?  Why was it so troublesome?

I would say each song always presents challenges. Some are harder to actually write, then super easy to record and fall into place when mixing. Sometimes it’s easy to write and then suddenly so complicated to mix. Recording my vocals for this record for me was the hardest part since I had a cold. I actually ended up re-recording everything in one day after SXSW when I feeling better. (LC)
Which of the songs on the record is most different from your original concept for the song?

The song “In Empathy” definitely is different than the original concept we had. Once everyone added their different parts it changed. It’s really cool seeing how things come together when we’re working together. (LC)
Who produced the record?  What input did that person have that changed the face of the record?

We worked with David Psutka from Egyptrixx and Hiawatha. He definitely impacted the final album. David has a great ear and really helped us in deciding what was important. (CM)
James Powell was one of the engineers on the record and working so closely with him and David definitely affects the writing process. We always came in with completed songs but once you start getting so intimate with them, you start making subtle changes to polish up the tunes. We are very fortunate to have been able to work with two people who really understand our sound and vision. (Gustavo Aldana)
Did you have any guest musicians play or sing on the record?

Nope, just us. David (Psutka, the LP’s producer) definitely had creative input, as did our engineer James Powell. James actually programmed a midi part on “Movement”, too. (CM)
Is there an overarching concept behind your new album that ties the record together?

There is no direct or intentional concept that we consciously centered the album around. We just wrote new songs and created art we all liked and it all came together. (LC)
Have you begun playing these songs live and which songs have elicited the strongest reaction from your fans?

Yes, we have been playing them live for quite a few shows now. Our set for our July tour is pretty much all new songs, except the two off the Deathday split. Almost every time we play I get different feedback, people alwaysseem to have different favorites. Of course a lot of times the audience gets more excited when we play the songs off the split as they have heard them more or seen our video. (LC)
(Download Bestial Mouths’ “Reunion” via Soundcloud here.  Visit the band here: http://bestialmouths.tumblr.com/.)