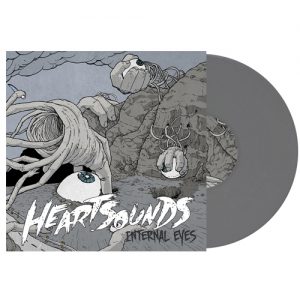 Bay Area punk rock group Heartsounds is at the cusp of releasing their third full-length album on October 15 via Creator-Destructor Records in the U.S. and Flix Records/Cargo Distribution in Europe (it is available for pre-order now at http://creator-destructor.com/).  Recorded, mixed and mastered at Castle Ultimate Studios in Oakland, CA with producer/engineer Zack Ohren, Internal Eyes is Heartsounds’ follow-up to their 2011 album Drifter (Epitaph Records) and finds the band reaching an interesting new level of songwriting and musicianship, while maintaining their signature punk rock sound.  Heartsounds’ latest effort focuses heavily on technically driven, heavy metal-influenced guitar work, thundering drums and harmony laden melodic dual vocal performances between guitarist/vocalists Laura Nichol and Ben Murray.
Ghettoblaster recently had the opportunity to discuss the record with Murray.  This is what he said about the new record (with a little sidebar on working with Brett Gurewitz of Bad Religion on their last one).