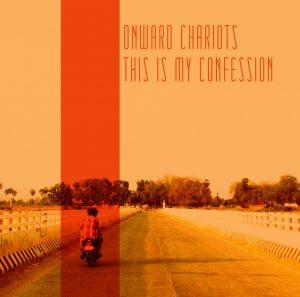 This Is My Confession

On January 29, taking a cue from Usher’s playbook (not really), Onward Chariots released the sixteen song, This Is My Confession, a concept album about saving a doomed love affair.  The songs chronicle one man’s struggle with what it is to love, from babyhood to adolescent crushes to failed relationships. Musical styles range from lushly arranged indie pop to garage rock to orchestral minimalism and cheesy dance-pop. There’s even a song about Mel Gibson.
Ghettoblaster caught up with frontman Ben Morss, who has played with bands like Cake and Wheatus, and who is currently working on a rock musical about anarchists, to discuss the album.  This is what he had to say about it….
When did you begin writing the material for your most recent album?

The idea to create a full-length album popped into my head during the flight back from our last European tour.  We were pleasantly amazed at the attention we’d gotten from the international indie-pop community by creating a couple of four-song EPs, but that had only gotten us so far.  If we were a Dungeons & Dragons character, we might be a fourth-level wizard.  And it struck me that we should record something really big and ambitious and try to show the world what we could do – even though we’d be recording it all ourselves in our apartments.
What was the most difficult song to take from the initial writing stage through recording and mixing?  Why was it so troublesome?

“Sisters and Brothers” was a big challenge musically, lyrically, and recordingly.  I had a nice idea for a chorus that referenced the classic song from “Free to Be You and Me.”  But the verses I came up with just seemed to fall flat, and the lyrics were rather self-pitying.  Finally I found a way to twist the end of the chorus so that it could anticipate a whole different sort of verse, and after much writing the lyrics grew compact and intriguing.
Then we recorded the song using a very old Rhodes electric piano that had some broken keys and was severely out of tune… which Dan expertly blended with a couple of tracks I recorded later on my computer… our violinist had to leave town moments before I scribbled down a part for him which he did in one take… I had problems singing some of the high notes in full voice… but Dan did an amazing job pulling everything together, and now it’s one of my favorite songs on the record.
Which of the songs on the record is most different from your original concept for the song?

“I Want to Be with You” was originally written for a different band as a grungy power-pop number.   When we started this band and I taught myself to sing all over again, I sang a bit of this song along with a simple electric piano accompaniment while trying to learn to sing in a more gentle fashion.  A year or so later, I stumbled across the recording and played the song for the band in that version – and thus it became a quiet, contemplative little song.
Did you have any guest musicians play or sing on the record?

Oh my yes.  It dawned on me that lots of other bands were using nonstandard rock instruments – so why couldn’t we?  Eventually we brought in a violinist, trumpeter, clarinetist, oboist, a mandolin player, and a kindly software package called Reason.  My only regret is that we were unable to involve a female guest singer… we had to sing the high parts ourselves!
Who produced the record?  What input did that person have that changed the face of the record?

Dan, our drummer, recorded many of the tracks and produced everything in his apartment, and I recorded the rest in my own apartment.  What you hear combines the home-made quality of home recording with Dan’s mixing skills and about 300 emails from me full of requests for changes – a genuine and complex collaboration!  An oversimplification is: I think Dan likes tracks that sound the way they were played, and I like to experiment… of course he might say something else.
Is there an overarching concept behind your new album that ties the record together?

I’m glad you asked! As the album opens, our hero is watching his girlfriend walk out the door.  She’s discovered that he’s known as a bit of a player and no longer trusts him.  He says, “Wait! I can explain!”  The explanation is his Confession, like the Arabian Nights – a series of stories about past experiences with love, from babyhood to the beginnings of maturity, to try to convince her that his serial love affairs were a noble search for true love, and he could never settle for anything less.  Finally, he simply he tells her he wants out of that sort of life (“Get Me out of This Party”) and begs her to “Stay.”  I’m not personally entirely convinced by his performance.
Have you begun playing these songs live and which songs have elicited the strongest reaction from your fans?

Yes.  A few of the new songs are quieter and more thoughtful than what we’ve done before, and it’s been gratifying to see that those have been among the most successful. I’ve always been afraid to sing slow or soft songs – when I tried, I stared at people in the audience, thinking, they must be thinking, who does that guy think he is? How pretentious is he? Now I just think about the character who’s singing the song and the lyrics and lose myself in that.
( Download a song from the album and check out the band’s upcoming dates below:
Onward Chariots – “Get Me Out of This Party”
02.09 – The Rusty Nail – Ardmore, PA
02.10 – Galaxy Hut – Arlington, VA
02.24 – The Rock Shop – New York, NY)

Tags: Cake, Onward Chariots, This Is My Confession, Wheatus