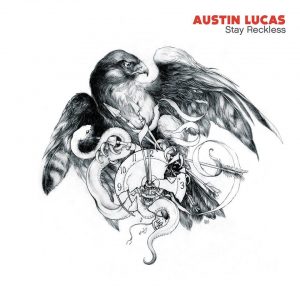 Austin Lucas was raised in the backwoods of Monroe County, Indiana, and born into a folk and bluegrass lineage. He started singing at a young age and honed his vocal control as a member of the nationally acclaimed Indiana University Children’s Choir where he sang in a variety of operas among other things. In his teen years he played in a slew of punk bands and over the next decade became a fixture in the crust punk (metal-influenced punk) and hardcore scenes both in the U.S. (he was in Dayton’s Rune) and Prague where he lived for five years.
After realizing the damage he was doing to his voice by screaming, Lucas traded the brute force of punk and metal for melody and returned to his Americana roots. He started writing songs on an acoustic guitar that were in the vein of the classic country, folk and bluegrass that he had been raised on.
Fresh off a solo run on the Acoustic Basement stage at Warped Tour, alt-country crooner Austin Lucas has put together a cracking band for the first of what’s sure to be many tours in support of his anticipated New West Records debut, Stay Reckless, out August 27. Stay Reckless is Lucas’ first for New West and fifth studio LP overall.  It fuses elements of alt-country, classic rock, folk, punk, indie rock and bluegrass into a unique brand of Americana.
The road-worn Nashville-based troubadour, who tours nearly 10 months out of the year, will kick off the headline tour August 17 in Columbus, Ohio and play all throughout the Midwest and Southern U.S. (dates below).
Ghettoblaster caught up with Lucas prior to the run to discuss Stay Reckless.  This is what he said about it.
When did you begin writing the material for your most recent album?
I started writing about six months after I wrapped recording my previous album. I always give my brain a six month rest after I complete a body of work as I just want to make sure that my creative impulses have the chance to properly reset and I don’t just keep writing the style of songs that were on the previous record. I give myself half a year to become obsessed with new records and have a whole different set of songs and emotions stuck in my head.

What was the most difficult song to take from the initial writing stage through recording and mixing?  Why was it so troublesome?
Probably the song, “Splinters.” We had it worked up with a full band arrangement and after several takes, we ended up cutting it and stripped it down. We felt bad about it because Eric had worked extremely hard on getting the drum parts how I wanted them, but in the end I think that the song benefited from the sparse arrangement that we went with.
Which of the songs on the record is most different from your original concept for the song?
Definitely, “Alone In Memphis.”  I wrote it as an incredibly stripped down kind of sad bastard type of song and it ended up being an anthem of sorts. Funny how that works out.

Did you have any guest musicians play or sing on the record?
Oh yes, lots and lots. First off, I had Glossary acting as my backing band for the whole album. Then we had some folks come by to lend a hand on a few different tracks. Cory Branan came and played some guitar and organ. Hoot Hester played fiddle and mandolin and Chris Scruggs from BR-549 came over to sing backups and play a little bit of lap steel. Honestly, it was awesome having all the different folks come by to collaborate. With each person who contributes, you find a new set of eyes and opinions to put toward the songs and this record very much benefited from all the different outlooks and energy that each person brought.

Who produced the record?  What input did that person have that changed the face of the record?
Mark Nevers produced it and I could list off a few hundred different ways in which the album was brought forth due to his expert vision. Instead of listing those off, I’ll give you one really good way in which he benefited the album and thereby changed its face. Mark is an excellent collaborator, he hears things and sees things that I certainly do not. That being said, he also recognizes that other people see things that he in turn may not. It’s his capacity to listen to the opinions of everyone involved, while simultaneously putting forth his own, that made this record fly the way that it did.
Is there an overarching concept behind your new album that ties the record together?

It is a divorce record as I was going through a divorce throughout the majority of the writing process. In some ways it is a bit typical of other breakup albums I suppose. Although, I really wasn’t wallowing in my own self pity so much. I wanted to display the moving forward with life, rather than the dwelling upon the sadder aspects of a divorce. If you listen to the record, I think that you can hear a triumph over adversity, as opposed to a break down into the world of a shattered heart. Don’t get me wrong, there is sadness in there, but there is also hope for the future and that even with an ending, there is always the opportunity for a new beginning.
Have you begun playing these songs live and which songs have elicited the strongest reaction from your fans?
I definitely have, I suppose that “Alone In Memphis” has really been the breakthrough song that most folks have latched onto, but there have also been a number of recently divorced and separated folks who have been responding to my song “Rings.” That’s a song about my wedding ring and how a few weeks after I was married, it suddenly and quite literally didn’t fit my hand anymore. One day my finger shrank or something and after that it just refused to stay on. I was always in fear that I’d lose it and as a result, it spent a lot of time in the change pocket of my pants.
(Catch Lucas on tour at the following dates:
August 17 – Columbus, OH @ Rumba Cafe
August 18 – Cleveland, OH @ Cleveland Public Theater – Weapons of Mass Creation Festival
August 29 – Louisville, KY @ Zanzabar *
August 30 – Bloomington, IN @ The Bishop *
August 31 – Cookeville, TN @ Muddy Roots Festival
September 2 – Tupelo, MS @ The Blue Canoe *
September 3 – Little Rock, AR @ White Water Tavern *
September 4 – Oxford, MS @ Proud Larry’s *
September 6 – Birmingham, AL @ Bottletree *
September 7 – Baton Rouge, LA @ Mud and Water *
September 8 – New Orleans, LA @ Circle Bar *
September 10 – Pensacola, FL @ Handlebar *
September 11 – Gainesville, FL @ The High Dive *
September 12 – St. Petersburg, FL @ The Shelter *
September 13 – Jacksonville, FL @ Rain Dogs
September 14 – Atlanta, GA @ The Basement
September 15 – Durham, NC @ Motorco
September 16 – Richmond, VA @ The Camel
September 17 – Harrisonburg, VA @ The Blue Nile
September 18 Knoxville, TN @ The Well
* With John Moreland)