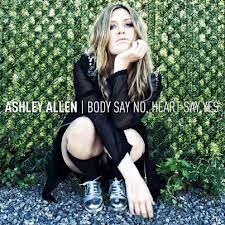 New Yorker, Ashley Allen is a singer/songwriter whose vibrant artistry is a powerful mix of call-to-arms positive messages, blissful hooks, and uplifting dance floor anthems.  She’s garnered favorable comparisons to Katy Perry, Kelly Clarkson, Mika, Demi Lovato, and Lily Allen.
Having been featured in the likes of Huffington Post, Charged FM, Joonbug and NKD Magazine, Ashley has also been lighting up the stage at legendary NYC venues such as Rockwood Music Hall, Bowery Electric, BB Kings, and Highline Ballroom as well as a recent Australian tour.
Ghettoblaster recently caught up with Allen to discuss her EP, Body Say No, Heart Say Yes, which dropped on December 10.  This is what she said about it.
When did you begin writing the material for your most recent EP?
I began writing about two and a half years ago. Pretty much once I graduated college the writing has been non-stop.
What was the most difficult song to take from the initial writing stage through recording and mixing?  Why was it so troublesome?
I wouldn’t say any one specific song was more difficult than another. When it comes to writing music every song is different. I would say though that it was a struggle for me to write and record my ballad ‘You Ruined Love’ because for a while it was hard for me to surrender to the heartbreak and be vulnerable.
Which of the songs on the record is most different from your original concept for the song?
For my EP that was released on December 10 I was lucky because the songs came naturally. They all sound the way they were intended to sound. However, some of the songs that weren’t on this EP are a different story.
Did you have any guest musicians play or sing on the record?
Cash Cash who are like brothers to me produced the tracks and well they are incredible musicians and producers. I am so grateful to have them involved.
What input did they have that changed the face of the record?
We really are so close that the process was so easy and fun. We all wrote the songs together and put our hearts into it. I really couldn’t imagine them not being involved.
Is there an overarching concept behind your new EP that ties the record together?
This EP really is just a very upbeat and fun introduction to who I am and some views I hold on life, love, and much more.
Have you begun playing these songs live and which songs have elicited the strongest reaction from your fans?

Yes I have been playing these songs live! I would say the songs with the strongest reaction are “Body Say No, Heart Say Yes” and “Touch Me”. “Let’s Go” has also been getting a lot of love. I am just excited to get this EP out so I can share these songs somewhere else other than a show!
(Check out Allen’s “Lets Go” music video here: http://www.youtube.com/watch?v=Gh98dpNL2MQ.)