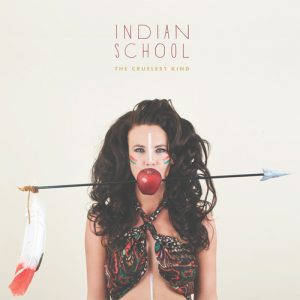 Singer songwriter Art Barrios hadn’t written music for years.  Then, within an eight month period, he had two major car accidents that left him bed ridden for months.  With a completely wrecked back and a twisted neck he was left with little to do with the exception of watching Netflix…and writing songs again.  The resulting efforts in songwriting lead to the reunion of former members of defunct punk band Audio Karate, who had toured relentlessly for four years, released two records for Kung Fu Records, and then called it quits.  The new start yielded a new moniker, Indian School, and some new influences: The Replacements, Guided By Voices and My Morning Jacket.
The band recorded their debut EP, The Cruelest Kind, with Shawn Sullivan (Mars Volta) and it was recently reissued by Animal Style Records on September 25.  Ghettoblaster caught up with Barrios to ask some questions about the record.  Here is what he told us…
When did you begin writing the material for The Cruelest Kind?
I started coming up with ideas around 2010 and then we started putting the songs together at the start of 2011.
What was the most difficult song to take from the initial writing stage through recording and mixing?  Why was it so troublesome?
It’s a song called “High Low.” We couldn’t get the format right.  We kept playing around with it. I’m still not really sure we pulled it off
Which of the songs on the record is most different from your original concept for the song?
I’d say it’s “Cocktail Flu.” I initially envisioned it being almost like a British indie rock song but it morphed into a much heavier song
Did you have any guest musicians play or sing on the record?
Only our bass players brother. He plays a mean banjo on “Head Right.”
Who produced the record?  What input did that person have that changed the face of the record?
It’s co-produced by Shawn Sullivan and he had quite a bit of influence. He beat us up over getting the performances right including pushing us to record and track one of the songs live (“Cocktail Flu”).
Is there an overarching concept behind The Cruelest Kind that ties the record together?
No not really, quite the opposite actually.
Have you begun playing these songs live and which songs have elicited the strongest reaction from your fans?
We have and I’d say “Cocktail Flu.” It’s our most visceral song, so it tends to get people a bit riled up.