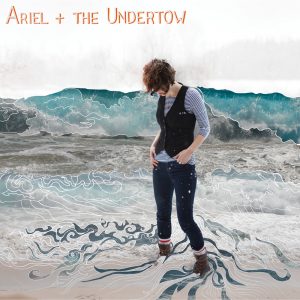 Singer-songwriter and multi-instrumentalist Ariel Rubin debuts her new band, Ariel + The Undertow via their self-titled debut on January 22. Rubin’s breezy croon is cut from the prime of ‘30s and ‘40s radio songstresses and sounds timeless.  In addition to garnering praise from all major press in Boston, she has toured nationally with such artists as Logan Vanderlic and Sea Of Bees.
After securing over $11,000 via Kickstarter to record earlier this year, Ariel + The Undertow’s self-titled debut marks her first work with a full band, and combines Ariel’s strengths with strains of neo-soul, retro future music (a la Sterolab, Cinmatic Orchestra) with a hand into Yankee Hotel Foxtrot experimentalism.
Ghettoblaster recently caught up with Ariel to discuss the record.  This is what she had to say about it…
When did you begin writing the material for your most recent album?
In 2008, though most of the songs were written between 2009/2010.
What was the most difficult song to take from the initial writing stage through recording and mixing?  Why was it so troublesome?
“Take Me Home” was probably the most challenging track. I initially wrote it as a bluegrass song and when my producer suggested turning it into a harder rock thing I balked. It really brought up an insecurity that I wasn’t cut out to be a “rock singer.” We did vocal take after vocal take and I couldn’t seem to loosen up. Finally Mike (my producer) drove us over to a nearby liquor store and bought me a bottle of Patron. He had me take two shots and try the vocals again, which is when I finally got it right. Sometime booze does help.
Which of the songs on the record is most different from your original concept for the song?
“The Lion” changed a lot over the years. I wrote it back in 2008 and it kept changing shape and taking new forms, sometimes as a soft ambient song, sometimes with a really strong reggae beat, and now finally to what it has become. When I finally heard this version, I got so excited because after so many different lives it had grown up to be the song I always imagined it could be. Kind of like having a kid…a mini, song formed kid who doesn’t need food or bedtime stories.
Did you have any guest musicians play or sing on the record?
I had an AMAZING group of people play on this record each and every one who I kind of idolize and have a crush on. Duke Levine played lap steel and electric guitar and he is one of my favorite living guitar players. Jamie Edwards is a crazy musical genius whiz kid and created sounds with his synthesizers that I didn’t know existed. Annie Hoffman played bass and is probably the most chill, gorgeous tall blond vixen to ever hit the low end. A lot of the lines she came up with ended up being the overarching sonic theme for those tracks.
Who produced the record?  What input did that person have that changed the face of the record?
Mike Davidson produced the record. We’ve been working together for two years now, he also produced my solo EP released last year. Funny enough, I found him on Craigslist and it’s been one of the most fruitful collaborations I’ve been a part of. Mike helped to take my fledgling ideas and raw vocal lines and dress them up all pretty. He really added a level of polish and sophistication to the sound that I had struggled to find on my own.
Is there an overarching concept behind your new album that ties the record together?
While I wasn’t aware of it while writing the songs, I can see now that there is an arching theme about not giving in to darkness. These songs were written coming out of a very difficult emotional time in my life where I was struggling with physical and mental illness and at first they were merely meant to be cathartic and personal. Now as a record, they’ve taken on their own life that’s not just about me and my little struggles, but about an intrinsically human experience, struggling against our own evils, shortcomings and dark thoughts to find triumph, connection and reason to keep getting up in the mornings.
Have you begun playing these songs live and which songs have elicited the strongest reaction from your fans?
We’ve been playing the songs in different forms for the past two years and have received some amazing feedback. Funny enough, after all my insecurities I’ve had a number of people go gaga for “Take Me Home.” We had a really moving experience last year when a woman approached Duey after a show and said that she was going through cancer, but that she was so moved by the set she had had an entire hour where she wasn’t sick at all. It was pretty humbling and amazing to hear that, if that’s not a reason to make music I don’t know what is.
(Alarm Press recently premiered Ariel + The Undertow’s first single “Kindness From Strangers.” Check it out here: http://alarm-magazine.com/2012/mp3-premiere-ariel-the-undertows-kindness-from-strangers/.)