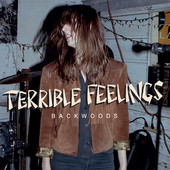 Terrible Feelings from Malmö, Sweden have existed since fall 2009.  As many great bands have, they sprung out of late parties, punk rock, pop, and friendship.  To date, the friendship has yielded three 7”s and one full length album. Perhaps you recognize them from one of their five full European tours and two U.S. tours (one on each coast), during which they’ve shared stages with Jeff the Brotherhood, White Lung, Imperial State Electric, Fucked Up, The Raveonettes, and The Babies.  On yeah, they were also handpicked by none other than Refused as support in both Europe and Sweden on their final tour.
Musically Terrible Feelings has been described as proto punk, dark power pop and gloomy surf, with a tint of both country and 70s hard rock. All descriptions are correct. It’s rock ‘n’ roll.
August 2013 will see the dawn of “Backwoods”, the band’s first release in over a year. The release features three new songs on 7” format, which will be available via Deranged Records.  Ghettoblaster recently caught up with Terrible Feelings’ Anton Collinder to discuss the record.  This is what he told us…
When did you begin writing the material for your most recent 7-inch?
It was being written on and off throughout 2012, which was a busy year for us. I remember coming up with most of the basic ideas for the songs at work in between tours, while doodling with something else. Stuff just pops up. But I don’t think we started rehearsing them until late 2012.
What was the most difficult song to take from the initial writing stage through recording and mixing?  Why was it so troublesome?
It wasn’t any of the songs that ended up on the 7-inch. We recorded two additional tracks that are not on there. One of them is called “Ambivalence” and turned out to be pretty difficult to get through the studio-process, because it was a bit overdone. We worked too hard on it while rehearsing and then while recording it wasn’t cohesive enough, sadly. But I’m pretty sure it’ll turn up in a different version on another record, and then it should be a killer.
Which of the songs on the record is most different from your original concept for the song?
The B-side, “Black Winter Night”. I originally wrote it as some kind of Springsteen-esque Nebraska-era song. But it became an ‘80s Blondie/Billy Idol thing instead. But then again, Nebraska came out in ‘82, so there’s a connection.
Did you have any guest musicians play or sing on the record?
There might be a friend who claps hands, but nothing that stands out. However, I’d love to have more people playing different stuff on our recordings. Next time I’m very certain there’s gonna be harmonica, saxophone, organs, etc. More fun!
Who produced the record?  What input did that person have that changed the face of the record?
We had a friend called Erik Sunding who functioned as an engineer and subtle producer, but he mostly came with suggestions on some arrangements that didn’t alter the sound on a larger scale. However, Linus Andersson who mixed and mastered the record did an awesome job. He really managed to generate the sound we all knew we wanted for the 7” but didn’t know how to achieve. He also mixed the Goat LP, which is also quite raw and organic. We wrote down notes and listed artists that we wanted to sound like, and he just said “I get it”, and that was it.
Is there an overarching concept behind your new 7″ that ties the record together?
Not in the same total way as with the LP, but I think this is basically a follow-up to that album. Lyrically and song wise.
Have you begun playing these songs live and which songs have elicited the strongest reaction from your fans?
We’ve played them all. People seem to get into all of them, but perhaps a bit more eyebrows are lifted when we play “I Don’t Even Know You”. That song really turned out great.
(Terrible Feelings premiered “I Don’t Even Know You” at Ghettoblaster earlier this week.  Check it out here: http://ghettoblastermagazine.com/2013/song-premiere-terrible-feelings-i-dont-even-know-you/.)