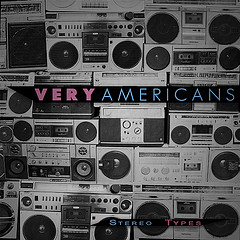 Very Americans is an indie rock band from Harrisburg, Pennsylvania that consists of ex-members of Junction (Art Monk Construction), The Commercials (Blackout Records), and Safari So Good (Takeover Records).  The members’ previous bands all have a history of releasing records on prominent indie labels, touring nationally and internationally, and have had the chance to share the stage with many influential bands in the hardcore and punk community such as Fugazi, Nation Of Ulysses, Born Against, Supertouch, Saves The Day, At The Drive In, Sensefield, Cursive, Boy Sets Fire, and Me Without You to name a few.
Displaying superb precision and musicianship, Stereo Types driving and atmospheric indie-rock recalls everything from the Doves’ Lost Souls LP to the likes of Superchunk, Sunny Day Real Estate, Radiohead, Coldplay, Chamberlain and more. After recording their EP with renowned producer J. Robbins, the band signed with prominent indie label Eulogy Recordings where they’ll be releasing their latest effort on CD and digital formats on January 21, with a special edition, hand numbered pink 12″ vinyl release set for March 18th through Rock Paper Records.
Ghettoblaster recently caught up with guitarist Anthony Bavaria to discuss the EP.  This is what he said about it.
When did you begin writing the material for your most recent EP?
We began writing everything a little over a year ago.  We’re constantly writing new stuff at practice and building up ideas.  Sometimes stuff keeps moving forward and we end up finishing it, and other times we just sort of bank the idea and revisit it later, or just cut it completely.  I think we can tell pretty quickly if we’re excited about something, or if we feel like it’s not working.  If we’re not digging it, it gets the axe.
What was the most difficult song to take from the initial writing stage through recording and mixing?  Why was it so troublesome?
Since we’re pretty quick to cut songs that aren’t really coming together, I don’t know that any song specifically was very difficult on its own from a writing perspective.  We do have a tendency to sort of over do it with guitar tracks though when recording though.  Some of the songs had twenty to thirty different guitar tracks, which most people would say is pretty excessive….   From a mixing perspective it can get somewhat difficult to make all those tracks fit and have their own space in the overall mix.  That’s the fine line I think we had to face, was just making sure we could get everything in and make everything work all together.
Which of the songs on the record is most different from your original concept for the song?
I think “Fast Planes to Rio” was one of the oldest songs that made it to the record.  It was one of the first songs we wrote, and we actually had all the music written before Rich our singer joined the band.  So I think that song specifically ended up being a little different from where it first started in that I think we all had different melody ideas in our heads originally since we were practicing it for so long without vocals.  I think that it ended up working great though, and I really love Rich’s vocal ideas and melodies.  He brings a lot of good stuff to the table.
Who produced the record?  What input did that person have that changed the face of the record?
J Robbins produced and mixed the record.  He’s been in a ton of great bands like Jawbox and Government Issue, and mixed a lot of our favorite bands like Texas Is The Reason and The Promise Ring.  We are just huge fans of his, so we were really excited to get to work with him.
J. had a lot of great input, and he just brings so much experience and tons of ideas to the table.  We were just all on the same page right from the beginning too. He knew exactly what we were looking for and it all just came together really organically. Sort of to my point before about having so many guitar tracks, he was just able to find a spot for everything in the mix and make everything work together in  a cohesive way.  We were all super happy with the end product!
Did you have any guest musicians play or sing on the record?
We didn’t. We were going to ask J. to maybe do some guest vocals but we kind of ran out of time. I think it’s definitely on the agenda for the next recording though!
Is there an overarching concept behind your new EP that ties the record together?
I don’t know that there’s an overarching concept to the album, but I do feel like we wrote these songs after being a band for not very long, and things have been moving pretty quick.  I think that urgency and that excitement translates in the recording.  I think we’re all very excited about everything we’ve been doing, and we’re having a lot of fun doing it.
Have you begun playing these songs live and which songs have elicited the strongest reaction from your fans?
We have, and they’ve been a lot of fun to play live!  I think we’ve had really good responses to the first song on the record called “Floodgates”.  I think that’s a lot of people’s favorite, and I think we all really like it too. That’s really the reason it starts the record, and also why we chose it as the song we shot a video for.
We also do a cover of the song “Don’t Change” by INXS on the record which a lot of people really respond to live.  They’re a great band, and that song is a lot of fun to play.