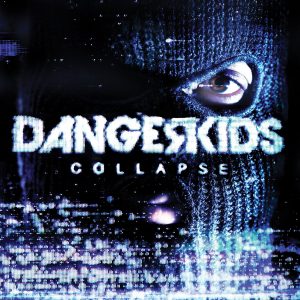 Dayton, Ohio’s Dangerkids released their debut album, Collapse, via Rise Records in September and that was the first Ghettoblaster had heard of them.  Having only formed in April 2012, the Ohio based rockers have had a pretty epic year; they were named one of Under The Gun’s Top 5 Artists To Watch in 2013, toured in support of Sleeping With Sirens, We Came As Romans, and Attack Attack, and played the 2013 Skate and Surf festival in Jackson, NJ.
Ghettoblaster recently caught up vocalist Andy Bane to discuss Collapse.  This is what he had to say about it.
When did you begin writing the material for your most recent album?
We actually began writing the music before the band was even formed. Our emcee, Tyler Smith, started writing the music a few months before adding myself. We started to piece some ideas together and realized we wanted Dangerkids to be more than just a project. It became something very real and special to us. We then added the rest of the band who we had been long time friends with growing up together in the Dayton music scene.  And the rest is history!
What was the most difficult song to take from the initial writing stage through recording and mixing?  Why was it so troublesome?
I would probably say “Cut Me Out”. It might not have actually been the most difficult, but it definitely took the longest. The opening piano piece was one of the first things Tyler wrote and it was the last song we finished writing/recording. I’m not exactly sure why or how it worked out that way, but it turned out great! It’s one of my personal favorites on the album.
Which of the songs on the record is most different from your original concept for the song?
Probably “Unmade”. The first part we wrote was the chorus but we didn’t really know where we were heading with the song. It turned out very different than what we expected, but it quickly became another one of our personal favorites. It has some of the best lyrics we’ve written and is probably the most unique song on the album.
Did you have any guest musicians play or sing on the record?
Not on Collapse, but we have thought about featuring some of our good friends on the next album!
Who produced the record?  What input did that person have that changed the face of the record?
Tyler actually produced and tracked the whole album himself in his apartment. It offered us a lot of freedom to take as much time as we wanted. Many times we were tracking vocals at 4 am to nail that perfect take, which was something we couldn’t have done in a studio. We later put the record in the hands of our good friend Joey Sturgis to mix/master and he killed it!  He really made the whole record shine.
Is there an overarching concept behind your new album that ties the record together?
All of our lyrics come from real experiences and things we’ve been through – good times and bad. If one theme carries across the whole record, it would be getting up after you’ve been knocked down. There are always going to be people who tell you what you can’t do but don’t ever listen to them. Follow your own advice and do whatever makes you happy!
Have you begun playing these songs live and which songs have elicited the strongest reaction from your fans?
“Hostage” always gets a very energetic response as well as “Waking Up”. The people coming out to these shows have been nothing short of amazing and we get overwhelmingly positive responses after every song!
(Visit Dangerkids here: