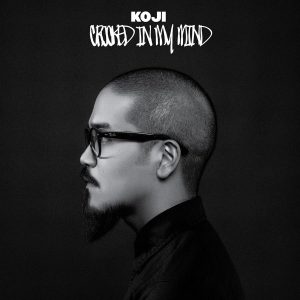 Crooked In My Mind

Pennsylvania singer-songwriter Andrew Shiraki, better known by his middle and stage name Koji, was once a staple of community house, hall and basement shows.  Following last Summer’s stint on the Warped Tour, The Fest in Gainesville, and a tour with Never Shout Never, Koji hit the studio to record his debut full-length LP.  Crooked In My Mind dropped April 30 via Run For Cover Records. With production help from Will Yip and appearances by friends in La Dispute, Balance and Composure, Title Fight, Gypsy and Lauryn’s Hill’s, showcases the mature, earnest, heart-on-sleeve rock fare that he’s become known for.
Ghettoblaser caught up with Shiraki to ask some questions about the LP.  This is what he said about it…
When did you begin writing the material for your most recent LP?
The first song, “Chasing A Ghost,” was written in 2011. The rest followed.
What was the most difficult song to take from the initial writing stage through recording and mixing?  Why was it so troublesome?
“In The Line” and it ended up being the first single. It was one of the last ideas we worked on and I think it took a lot of mental strength to get through. Now, I know what kind of endurance it takes to make a full length. Much respect to anyone who has made one before.
Which of the songs on the record is most different from your original concept for the song?
Each song has a path, but I’ve never considered that.
Did you have any guest musicians play or sing on the record?
Brad Vander Lugt from La Dispute played drums. Matt Warner from Balance and Composure played bass. Ned Russin from Title Fight played bass on a couple tracks. Ron Gilmore from Lauryn Hill and Drake’s bands played keys. Colin Gorman from Gypsy played electric guitar. I was blessed with an incredible team.
Who produced the record?  What input did that person have that changed the face of the record?
Will Yip produced/engineered/mixed the record at Studio 4 in Conshohocken, PA. He was instrumental in crafting the organic sound of the record. Our goal in creating Crooked In My Mind was to achieve something true and honest. Will’s gifts and production style were aligned with what we wanted to accomplish, so he was natural choice.
Is there an overarching concept behind your new album that ties the record together?
There aren’t any “love” songs on the record, but you could say that every song is about love. I don’t think I give many answers whenever I write a song, but it opens me up to be able to consider new ideas and working things out in my head. On this record, I took a look at our digital environment, discrimination/bullying, my own rage, loss, resilience, harmony, peace, and love.
Have you begun playing these songs live and which songs have elicited the strongest reaction from your fans?
I started playing “Chasing A Ghost” on Warped Tour and by the end of the tour, kids were singing the words that they learned off YouTube. That was a really cool feeling. It’s always cool to watch people connect to the work. “Chasing A Ghost” means a lot to me, so it’s really something to sing those words with other people.
(Visit Koji here: www.facebook.com/kojimusic.)