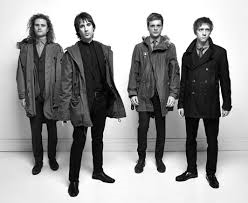 The group is fronted by Alphonse Alixander Lanza III (vocals/guitar) who reveals his passion for classic compact rock/pop tunes by stating “before starting The Cruelty Party, I spent a lot of time in London at one point and was seeped in that atmosphere from Mod to Psychedelic music and garage groups.”
This style may be seen as a direct about-face to Lanza’s previous position as a member of electronic music buzz-band Azari & III.  That group was critically acclaimed by various media outlets including Pitchfork.
Ghettoblaster recently spoke with Lanza III about the band.  This is what he said.
When did you begin writing the material for your upcoming album?
Yes lovely. So some of the songs and ideas existed for years and others were recently generated, but the main impetus to take this direction with extreme prejudice struck in April of 2012 and was brought to a boil over the next 12 months.
What was the most difficult song to take from the initial writing stage through recording and mixing?  Why was it so troublesome?
Luckily, and rather unlike other more pieced-together productions I’ve been a part of, these songs come fast and true and arrived not a moment too late, as the cumbersome realization of my trajectory and destiny at the time grew ever more heavy on my soul.  It did take a little experimentation to hone in the sound we were feeling inside us, but once we had the four-piece doing the rhythm tracks live off the floor, and the tape was rolling, we knew had reached level 1 of our new fight against boredom, tyranny and the exponentially progressive cultural erosion.
Which of the songs on the upcoming record is most different from your original concept for the song?
“Unicorns”, perhaps. It started off rather timid and blossomed into a lovely, bittersweet little chugger.
Did you have any guest musicians play or sing on the record?
Yeah we had Milan Julius Schramek on guitar and vocals and Sean Dunal on drums and percussions for the tracking. Might have been a couple of  lilting local voices dubbed in on a social studio night. But mainly it’s just The Cruelty Party doing it’s thing.
Who produced the record?  What input did that person have that changed the face of the record?
I did. I tend to really dig in to the whole album process, when producing other artists I want to be a part of the concept, writing, recording, mixing, even mastering. They’ve called me a cruel task master, but it’s all in love and dedication the project.
Is there an overarching concept behind your new album that ties the record together?
There could be if you want there to be, so why ruin a participant’s unique interpretation with definitive, artist-direct certification?  Some possibilities include catharsis and redemption through the rigors, risk and spiritual reward of direct hand-to-guitar, voice to mic music. It’s also a tale of love and loss, excommunication and our uncanny ability to be our own worst enemies.
Have you begun playing these songs live and which songs have elicited the strongest reaction live thus far?
Yes! We’ve done scorching shows, we’ve imploded on stage, we are stage beings. Currently we are rehearsing for the road, feeling the heat swell, and putting or relationships, bodies and psyches on the line for the hallowed sacrament…
(More info here: https://www.facebook.com/TheCrueltyParty.)