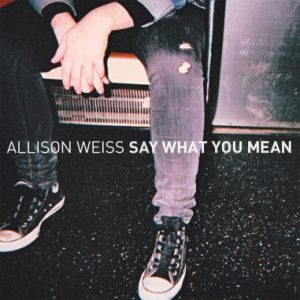 Say What You Mean

Brooklyn based indie-rock artist Allison Weiss, a former back-up singer for Lou Reed, who has been making serious waves with her emotional, pop-infused rock, will be releasing her sophomore album, Say What You Mean, on April 16 via No Sleep Records.  Fortunately, the press is having a hell of a time pigeonholing Weiss’ sound.  Some call her the female answer to Ben Gibbard, while others lean on comparisons to Jenny Lewis.  Others still conjure comparisons to Candy Hearts and Weakerthans.  Whatever, the final verdict, it is clear that she’s keeping expert and diverse company.
Ghettoblaster caught up with Weiss to discuss her “break up record” Say What You Mean, and this is what she told us about it…
When did you begin writing the material for your most recent album?

I started writing for SWYM in the fall of 2010 right after I moved to New York, but I didn’t really know then that I was writing for this record. I went through a breakup that got me thinking about relationships a lot, and the songs I started writing then ended up being the songs I built the whole album around.
What was the most difficult song to take from the initial writing stage through recording and mixing?  Why was it so troublesome?

“Hole in Your Heart” was a tough one. It started out on acoustic guitar with a lot more swing to it, but the original drum part we wrote just wasn’t feeling good. We eventually just had to take a break from it and let it sit for a few months before just starting over. I’m not sure why it was so hard, but when we finally figured it out it felt so good.
Which of the songs on the record is most different from your original concept for the song?

“How To Be Alone” started out as a really soft quiet folk song with just a couple verses and a chorus. I liked it but I didn’t love it, and I felt like it had more potential. We decided to speed it up and make it loud, and then I wrote the second half of the song. I love how it starts and ends in completely different places.
Did you have any guest musicians play or sing on the record?

Really all of the musicians on the record feel like special guests to me. We had Elliot Jacobson on drums, Dave Eggar did strings, Ben Thornewill (Jukebox The Ghost) did some piano, Bess Rogers sang backups on a couple songs, Joanna Katcher (producer, Mitten) contributed a lot of synth parts, and of course my producer Chris Kuffner did a lot of bass and guitars. It was definitely a team effort from a number of talented pals.
Who produced the record?  What input did that person have that changed the face of the record?

My dear friend Chris Kuffner produced the record. He has an incredible ear for pop music. He’s also a perfectionist, and really spends a lot of time figuring out what parts are the best for the song. Sometimes we’d spend several hours just figuring out the guitar for a second verse, or the right keyboard sound for a buildup. We work really well together. We’re great collaborators.
Is there an overarching concept behind your new album that ties the record together?

It’s a breakup record, but it’s really fun. The songs are sad, but for the most part the music is upbeat and catchy. I started writing it after my first big real heartbreak, so the record is basically my ten tries at talking about my feelings while also trying to have a good time.
Have you begun playing these songs live and which songs have elicited the strongest reaction from your fans?