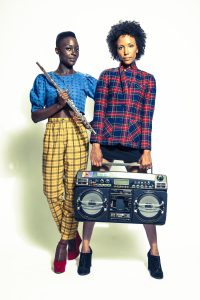 Flutronix, a critically acclaimed flute duo comprised of Nathalie Joachim and Allison Loggins-Hull, release their sophomore long player, 2.0 late this Spring. 2.0 was co-produced by Joachim and Loggins-Hull with Tony Maimone (Pere Ubu) of Studio G Brooklyn.
2.0  boasts a seductive but provocative range of styles from sensuous Neo-Soul to tracks that blend EDM with its serial-music roots – all prominently but tastefully featuring these ladies’ fleet, sweet flute work. Their multiple roles as composers, performers and producers have moved them to collaborate with artists and ensembles from different realms and disciplines, including electronic music sensation Dan Deacon, hip-hop producer Ski Beatz and conductor/composer Pierre Boulez’s International Contemporary Ensemble.  In recent years, they’ve garnered some great critical praise.
Ghettoblaster recently caught up with Loggins-Hull to discuss the release.  This is what she told us.
When did you begin writing the material for your most recent album?
Most of the material was written between 2011-2012. One piece, “Battle”, was finalized right before we went into the studio in early 2013.
What was the most difficult song to take from the initial writing stage through recording and mixing?  Why was it so troublesome?
By the time we went into the studio, we had thoroughly practiced, rehearsed and memorized the music, so recording our flute parts was a pretty smooth process that took about a day and half. Nathalie wrote and recorded all of the lead and backing vocals in only a few days, and did an incredible job of nailing the vocal doubles and other challenging parts. Our drummer, Joe Blaxx, had also been rehearsing with us prior to recording, and finished his tracking in one day.
We recorded with Melodia Women’s Choir in one evening at St. Peter’s Church in Chelsea, NYC, and their professionalism and artistry made for a seamless off-site recording experience.  Our engineer/co-producer was amazing and knew how to blend our acoustic sounds and the electronics in a very organic way. We had such a great, knowledgable team, so there really weren’t any troublesome moments.
Which of the songs on the record is most different from your original concept for the song?
The song that came together in the most experimental way was “She Is” featuring Melodia Women’s Choir.  We wrote and premiered it in 2011 with the choir, immediately loved how the flutes and electronics sounded within a gorgeous sea of female voices, and knew pretty quickly that it would be a featured track on the album.
When the time came to record, we decided to utilize the voices more throughout the piece (they were previously only in the intro and outro of the song).  Nathalie came up with the idea to focus on the different textural qualities that could be created using layers of their voices in addition to their traditional choral sound.  When we met with the chorus to record, we had developed a few conceptual ideas which we had them experiment with.  At that point, we didn’t know what of that we would use and/or how we would use it.
Once we got back into the studio with Tony Maimone and listened back to what we had captured, there were so many lovely textural options to choose from, so we further experimented there to select  segments and place them throughout the piece.  The result was really beyond what we had imagined – almost other worldly – and was very different from what we had originally performed with the chorus in 2011.  We can’t wait to try this new version live with them!
Did you have any guest musicians play or sing on the record?
Melodia Women’s Choir is featured on the final track, “She Is”. Tony Maimone plays bass on They Ain’t You, which is also co-produced by hip-hop producer Ski Beatz. Joe Blaxx plays drums throughout.

Who produced the record?  What input did that person have that changed the face of the record?
Tony Maimone co-produced the album with us and his influence was huge. He truly helped us bring our sound to the next level. He knew when to drop the beat, when to hold back and how to find the right colors for every sound so they matched beautifully with our flutes and Nathalie’s vocals. He also encouraged us to record live to tape, giving a rich and classic sound to all of the acoustic elements.  We are very lucky to have worked with someone with such good ears, experience and musicality.
Is there an overarching concept behind your new album that ties the record together?
We chose the title 2.0 because this music truly represents our evolution as a group. Since our debut album, we’ve added a drummer and more vocals, and most of the pieces are co-written, creating a cohesive fusion of our compositional styles.  Beyond that, our team has grown, and we’ve grown tremendously as artists over the past few years.  This album is a testament to our continued development and effort to always present the best possible version of ourselves.
Have you begun playing these songs live and which songs have elicited the strongest reaction from your fans?
Yes, we are actively performing these songs, and fans have really responded to “Everything Begins”, “Life Lines”, “Sweet Dreams” and “Flo”.
(Visit Flutronix at http://www.flutronix.com.)