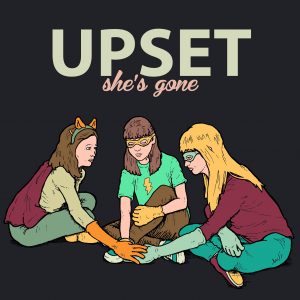 For the past few years, Ali Koehler has been best known as the drummer of the pop group Best Coast and the noisy girl punk trio Vivian Girls. After her departure from Best Coast, Koehler decided to step up from behind the kit to front a band of her own, embracing her melodic punk-spirited songwriting impulses with Upset.  Joined by Patty Schemel (of Hole) on drums and Jennifer Prince on lead guitar and vocals, Upset will release its massively hooky debut record, She’s Gone, this fall.
With 12 songs in just under 30 minutes, it’s a pop-punk album that immediately sounds classic, full of unshakeable hooks and the sincerest of shouts. It is fitting that She’s Gone will see a release with Don Giovanni Records; the record could easily fit in the record collections of Ergs or Lemuria fans.  She’s Gone was recorded primarily at Koehler’s house in April of 2013 by Kyle Gilbride of Swearin’.
Ghettoblaster recently caught up with Koehler and Prince to discus She’s Gone.  This is what they said about it.
When did you begin writing the material for your debut album?
Ali: Mostly Fall 2012 through recording in April 2013.
Jenn:  I think Upset had been playing together for about four months when we started recording.  Everything clicked between the three of us really quickly.
What was the most difficult song to take from the initial writing stage through recording and mixing?  Why was it so troublesome?
Ali: They all came pretty easily. “Phone Calls” is probably the most troublesome, though.
Jenn: The guitar melodies for “Phone Calls” were recorded on multiple tracks and improvised on the spot – I just kind of made it all up when Kyle (Gilbride of Swearin’) would hit record.  It was really fun to have that freedom and let loose on that track, but it is a challenge to re-create it live.
Which of the songs on the record is most different from your original concept for the song?
Ali: When “Oxfords and Wingtips” started I thought I was writing a song in the vein of Neil Young, but it kinda took on a life of its own.
Jenn: My original demo for “Game Over” is slow and sweet with clean guitar overdubs and very choral-esque harmonies.  As we started playing it as a band it became a loud, fast punk song with noisy distorted guitars.
Did you have any guest musicians play or sing on the record?
Ali: The only fingerprints on the record that don’t belong to me, Jenn, or Patty are Kyle Gilbride’s.
Who produced the record?  What input did that person have that changed the face of the record?
Ali: Kyle produced and engineered the record. He came up with all of the bass parts, co-wrote harmonies, sang with me on “You and I”, and added little flourishes of midi keyboard where we saw fit.
Is there an overarching concept behind your new album that ties the record together?
Ali: Novelty and jealousy.
Have you begun playing these songs live and which songs have elicited the strongest reaction from your fans?
Ali: Yes, our cover of 7 Seconds’ “Not Just Boys Fun” seems to go over well.
Jenn: People seem to enjoy our set, especially the faster songs, and like Ali said there are always some folks who are excited to hear our 7 Seconds cover. We have a lot of fun with that one.