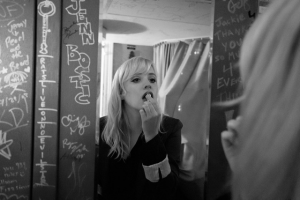 After a child-star career acting and singing Alexz Johnson (So Weird, Final Destination 3) was bound for success early on and the momentum continued into her early 20s –  signing major labels deals with Sony, then Epic. A few years older and a few major label-year’s wiser, the soulful/folky songstress is proudly independent.
Last Fall she decided to take advantage of her massive and extremely loyal fanbase — launching a PledgeMusic Campaign and successfully raised close to $50,000 from thousands of fans’ donations. The result is the Heart EP, which demonstrates exactly why she’s already received critical acclaim from The Village Voice, Billboard and MTV Buzzworthy, and has  collaborated with everyone from Bruno Mars to The Civil Wars’ Joy Williams, and Ron Sexsmith.
Ghettoblaster recently spoke with Johnson about the forthcoming EP.  This is what she told us.
When did you begin writing the material for the EP?
I initially started writing the new material at the end of 2012. I spent a good chunk of time in the studio with my brother Brendan, that September, in Toronto at Glassbottle Studios. I continued writing a lot throughout 2013.. gathering up enough songs to pick and choose which ones I felt would fit the album sound before heading into the studio with David Kahne.
What was the most difficult song to take from the initial writing stage through recording and mixing?  Why was it so troublesome?
I’m still working through two tracks. They’re just not done yet..  it’s the over-all sound. Sometimes songs are so easy — they complete themselves – like “Thank You For Breaking My Heart”. Other times, it can be more complex. I need to step away and get perspective. I’m too close to them sometimes.
Which of the songs on the record is most different from your original concept for the song?
I’d say “I Will Fall In Love”.
Did you have any guest musicians play or sing on the record?
J.D Simo and Parick Droney both offered they’re killer guitar skills. I also had The Clean Up Crew sing back-up’s on a few tracks.. super soulful, gospel-ish vibes.
Who engineered, mixed, mastered and/or produced the record?  What input did those people have that changed the face of the record?
David Kahne produced and mixed. Sabino Cannone at MoReVoX mastered the album.

Is there an overarching concept behind the record that ties it all together?
I want to emote classic – not throw-back. These songs we’re written with inspiration from a different time in music.. 1950s, ’60s. I hope to avoid trendy with this album. I hope it resonates on a real level with all ages.
Have you begun playing these songs live and which songs have elicited the strongest reaction from your fans?
I have. I just got back from a European tour with Wakey!Wakey and Ron Pope. I played a stripped-down acoustic set of the songs from the HEART EP (Album sampler available now on iTunes). I’ve had good reaction from them all, which is always a nice sign!
Watch her video for “Skipping Stone” here: