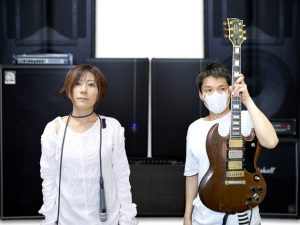 Japan’s speediest purveyors of experimental, but melodic, grindcore, Melt-Banana, are releasing their 10th album, fetch on October 1. Fetch scrapes glam shimmers off punk’s outermost fringes and forges them into a technical and intense dreamscape.  Agata’s guitar riff’s are bright and fractured and the whip-like crack of Yako’s signature staccato vocals and impossible to memorize lyrics add to the relentless overdrive tempo of their one of a kind prog-core.
Melt-Banana have long resided in a cybertopia of their own devising where the limits of technology and human capability are old-world concerns as quaint and cumbersome as bartering with a blacksmith. The demos for fetch, their first studio album since the severely fried pop-punk of 1997’s Bambi’s Dilemma, were completed in March 2011.  But the Fukushima earthquake changed everything, including their ability to concentrate on recording. Once they felt ready to return to their music, they decided to approach the songs on a sound-by-sound basis, choosing each tone with meticulous attention to detail, affirming their personal connections, being themselves naturally and openly.
Ghettoblaster recently caught up with Agata and Yako to discuss their incredible resolve, and writing and completing the forthcoming record.  This is what they told us.
When did you begin writing the material for your most recent album?
Agata:  It was around the end of 2010 when we started writing demos for fetch, and they were almost done in next spring. We were about to start real recording adding some changes, but it was stopped because of the big earthquake hit in 2011. We tried to re-start but we could not concentrate on it much… but we kept on going feeling that it would not be good to continue with such status. Our plan was to release the album in 2011 fall, but we could not finish it in time. After all, we did some tours which was supposed to be the tour for new album, and then return back to home for recording, etc. .. we just kept going. In the meanwhile, we decided to play shows in a two-piece lineup, and we became busier establishing the band that way. And it was about end of last year when things were settled. So, after all, we started writing songs for the album from the end of 2010, but we started actual studio recording end of last year.
Yako: And actually I am the one who is slow. Sometimes I become too picky when deciding on vocal parts.
What was the most difficult song to take from the initial writing stage through recording and mixing?  Why was it so troublesome?
A: I say, it was “My Missing Link”. When I was making the demo, I put many single guitar tones. I, now remember that ideas of some of guitar parts were made up when I did guitar solo live show, maybe in 2008, earlier than 2010, I forgot exactly when, though. Some ideas are from ones in that time. In this song, I recorded more than 10 guitar parts using a looper, and I chose tones and combinations that I usually didn’t use. When I added drum part, bass part and guitar codes, the song sounded sad, no matter what I did. Basically I don’t know much about so called music theory or codes, so I had to take a long time to find combination that I liked, trying one by one. After all, I thought it became hard work to use unfamiliar tones.
Y: Some songs have too many various sounds and it is hard to mix to make them clear and effective.
Which of the songs on the record is most different from your original concept for the song?
A: It is “Candy Gun”. Compared with the demo version, the same parts are only some sounds of wind and a part of code. It finally became totally different song from the demo version. I guess the image that Yako had on this song was not the same that I had from the beginning, so I changed the song little a little to set things straight, and at the end, the song transformed. But I actually like a process like this. I feel like some other force is mixed in though we two were making the song.
Also, we are using a sound of wind on this song. When we were mixing, we found it contained much low end, but it became a breeze if we took away the low end.  But it was not what I wanted… it was hard to mix to make the wind be the wind.
It was also hard to mix guitar sounds in.  There are 10 tracks of guitar. 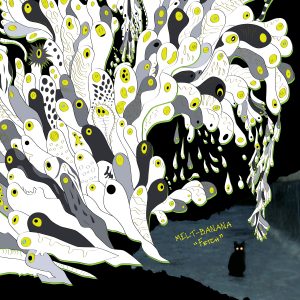