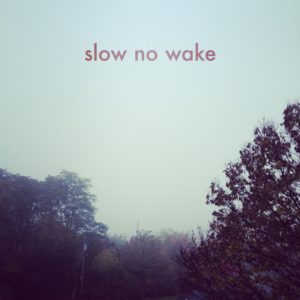 Slow No Wake is the musical project of Adam Theron-Lee Rensch. A multi-instrumentalist, Rensch wrote and recorded his first full-length album as Slow No Wake in bedrooms and closets throughout Ohio. Rensch, now 29, began writing music at the age of 16 as a guitarist in local metal band. While in college, he worked at a record store and became “something of a music nerd.” The store’s extensive collection of music provided Rensch with an eclectic array of influences, from classical and folk to jazz and obscure 60s pop. Among his biggest influences are Spiritualized, Can, Built to Spill, and Mazzy Star, as well as the minimalist works of Philip Glass and Arvo Pärt.
Rensch’s musical project began mainly as a hobby. Between 2003 and 2013, he wrote and recorded over 100 songs using loop stations and instruments salvaged from pawnshops to hone his layered sound. It wasn’t until his track “Everyone Needs Someone” appeared on the blog Indie Shuffle, however, that he considered releasing a proper album. The nine songs on Slow No Wake explore issues of love, mortality, and time, themes Rensch took interest in after the death of his father and stepmother. Several of the songs use writings from his father’s journal, the source of much of the album’s ghost imagery.
Ghettoblaster recently had the opportunity to chat with Rensch about the selt-titled record.  This is what he told us.
When did you begin writing the material for your most recent album?
This is album is kind of a weird mash-up of new and old material. Some of these songs I recorded earlier versions of as early as 2004. The opening track “We Begin,” for instance, is broken into three sections. The first I wrote around 2005, the second in 2012, and the last in 2004. They all sounded incomplete on their own, or never went anywhere when I tried to work on them previously, so I’d just been carrying them around, wondering what to do with them. Somehow, it all came together. Other songs, like “Everyone Needs Someone,” “Walk Through Walls,” and “The Tides,” were written last year.
What was the most difficult song to take from the initial writing stage through recording and mixing?  Why was it so troublesome?
The hardest song to finish was probably the last track, “We End.” I had a very specific idea for the song, and it was really hard to execute. I probably recorded my vocals 20 different times, and even now I’m not totally satisfied with them. I just had to let it be after awhile, and assume that anyone else wouldn’t hear them in the same way that I do (I am a ruthless self-critic). The end of the song, as well, which is long, slow buildup, was tough to nail down. I needed a balance between being patient and being redundant. I didn’t want it to be boring or anti-climactic, but I also didn’t want to make it easy for people listening and just lay it all out immediately.
Which of the songs on the record is most different from your original concept for the song?
Probably “Leave The Light On.” That song started with the opening section, the chorus, but was originally much more tame and dreamy. When I added the drum loop, everything shifted. It was suddenly this upbeat pop song that sounded very youthful and energetic. I ended up writing the lyrics around that, actually — what it feels like to be young, to stay up all night like nothing else matters.
Did you have any guest musicians play or sing on the record?
I don’t, actually. I did everything myself. I’d originally intended to have a friend of mine add some drums, but it never materialized and I was happy with the drum machine sounds I came up with.
Who produced the record?  What input did that person have that changed the face of the record?
The album is technically produced by me, I suppose, but was mastered at Chicago Mastering Service. When I went in, the idea was to keep the album’s sound as close to what it was when I originally mixed it down. I wanted a rough, “bedroomy” sound, if that makes sense, something imperfect and nostalgic sounding. The mastering mostly changed the overall vibe: it’s warmer now, less “digital” sounding, and definitely more full than the original mixes.
Is there an overarching concept behind your new album that ties the record together?
Absolutely. The album, as I imagined it, was primarily about mortality: what it means to be alive knowing that, eventually, you have to die. It’s a sad and terrifying realization, but also kind of beautiful in its own way. Many people close to me have died, including my father and stepmother. My father wrote about her a lot after she lost her battle with cancer. He suffered from heavy substance abuse and mental illness, and many of the songs have lyrics referencing his journals and things he used to talk about. All the stuff about time, ghosts, light — it’s all about dying, basically. Impermanence. A friend of mine told me that even the name I chose, Slow No Wake, could be about death: A slow process, and you don’t wake up from it.
Have you begun playing these songs live and which songs have elicited the strongest reaction from your fans?
I haven’t yet! I’m actually still figuring all that out. I work full-time, and would need to hire some people to play the parts, or find a way to perform them using minimal instrumentation (or both). Some of the songs have 15 or 20 tracks with 4 guitar parts and 3 keyboard parts, so I need to see what will work and what won’t. It’s definitely something I want to do, it’s just going to take a little time to work out all the logistics.
(Listen to Slow No Wake here: http://slow-no-wake.bandcamp.com/.)