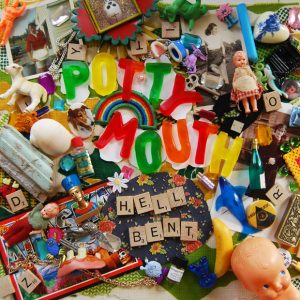 Western Massachusetts Potty Mouth are all-parts smart-pop craftswomen, specializing in taut, infectious, C-86 influenced indie pop meets ’77 punk perfection. The band released their debut 12″ vinyl EP, Sun Damage, in July 2012, which was praised by Pitchfork, as well as The Boston Globe, who named Potty Mouth one of the “Top Five Indie-rock Bands To Watch in 2013,” with BrooklynVegan adding they are, “one of the most promising new bands in their local scene.” Departing from the more angular shades of post-punk heard in their EP, Hell Bent is marked by its significantly heavier production and melancholic hooks. Nonetheless, the album stays true to the confident, youthful punk aesthetic the band has cultivated for themselves.
More recently, the band’s track, “The Spins,” was featured on NPR’s Heavy Rotation as one of its ‘Top 10 Songs Public Radio Can’t Stop Playing,’ and it follows their first single and accompanying music video, ‘Damage,’ premiered by VICE’s Noisey. They’re also a Stereogum ‘Band To Watch’: http://www.stereogum.com/1382391/band-to-watch-potty-mouth/franchises/band-to-watch/
Ghettoblaster caught up with guitarist Abby Weems to discuss the new LP, which drops on September 17 via Old Flame/Marshall Teller.  This is what she said about it…

When did you begin writing the material for your most recent LP?

A few songs, like “Shithead” and “Black and “Studs”, we wrote over a year ago, but the majority of them were written the summer of 2012 up until right before we recorded in December.

What was the most difficult song to take from the initial writing stage through recording and mixing?  Why was it so troublesome?
“The Spins” was hard because we had this idea to make parts of the chorus really noisy, but we weren’t sure how to pull it off. We finally decided that Abby would scratch her pick on the strings, but in the recordings there are also some bottle smashing sound affects!

“The Better End” was actually based off of a riff Phoebe wrote ages ago. We set a goal for ourselves to have 10 songs for the record but two weeks before recording we still only had 9, so we pulled this song out of the “archives” and came up with the other parts in one sitting. Then when recording we knew Phoebe would sing the first half with the lyrics she originally wrote, but because of the time crunch Abby ended up improvising her vocals in the second half! And we kept it!

Did you have any guest musicians play or sing on the record?
No, but in “Black and Studs” Ally and Victoria sing the “ooos” and Phoebe sings backup vocals on the chorus.

Will Killingsworth recorded and mixed the record with us. He’s really great because he gave us tips and suggestions, but he also totally gave us the chance to really make it our own in terms of the process of recording and how we wanted our instruments to sound.

Is there an overarching concept behind your new album that ties the record together?
Real life…ha ha! All of our songs are based off of something we’ve either experienced or observed, and we want people to feel like they can relate to the lyrical material.

We have a few staple songs in our setlist that we just love to play, and then we rotate the rest depending on the show or how we’re feeling. One song that people seem to point out a lot is “The Spins” because we all love to “go crazy” and whip our hair around while playing it!