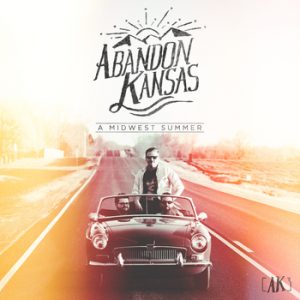 For the members of Abandon Kansas, their bright future as one of the Midwest’s most storied D.I.Y. indie-rock acts has them doing just about everything but deserting their roots. Seven years into their existence, the band has over 800 headlining tour dates and three releases on an upper echelon indie label under their belts. They’ve capitalized on the social media surge of the mid-late 2000s with fans by the numbers on every platform, and have graced the national Christian festival circuit across the board with headlining slots. From the outside, Abandon Kansas is the proverbial success-package that the music world at large seeks to achieve.
From the inside, Abandon Kansas was at a threshold of creativity. In 2012, Abandon Kansas found themselves at a vital crossroads – two singles charting on Christian radio, but no creative outlet to be themselves. With an album’s worth of new material that their label would not commit to releasing any time soon, the band approached them asking for a clean break. The break was respectfully granted, and the band quickly entered the studio with Dustin Burnett to begin work on A Midwest Summer – their first independent release in nearly six years.
The tone-heavy blend of dance-pop and true rock that will provide fans of Youngblood Hawke and Paper Route with their new obsession. A Midwest Summer hits digital retailers on June 11, so Ghettoblaster caught up with the band to discuss the record.  This is what they said about it…
When did you begin writing the material for your most recent EP?

We’ve been playing a new song called “The Chase” for a year now.  We wrote it back in February of 2012. The other songs for the full-length have been coming together the last two years, but the three on this EP are just three jams we felt like we could put out together for summer playlists. These songs have places in the sequence of a story we’re writing for the album, but they aren’t much of a story on their own. We wanted to get something out quick so people could get a taste of where we are headed sonically.
What was the most difficult song to take from the initial writing stage through recording and mixing?  Why was it so troublesome?
We had a lot of issues with the arrangement of “You+Me+The Radio.” It’s a pop song and we love interesting pop songs, so we just wanted it to feel great with these short quirky verses and a catchy chorus. When we finally leaned into more of an alternative tropical sort of vibe for the bridge the fantasy of the lyric really started to connect for me. We came up with that guitar hook later in the writing process and when I heard it on the track it was the perfect fit.
Which of the songs on the record is most different from your original concept for the song?
There are some on the full length that are panning out much differently than we thought they would originally, but the three on this EP are really close to our original vision for each song. One song that’s going on the full length started as a piano ballad but I think we’re going to end up with an R&B duet with a female singer situation. I’m stoked for that!
Did you have any guest musicians play or sing on the record?
Not on this EP, but we are going to stir up some fun guest appearances on this next album.

Who produced the record?  What input did that person have that changed the face of the record?
Dustin Burnett produced the EP, he mixed it as well. Dustin was awesome for letting us try every single idea we had before he would shoot anything down, but he was also great at reeling us back in. He seemed to take our vision seriously, just a lot of mutual respect and challenging each other to come up with something better the whole time we were in the studio and before we got there even, exchanging demo ideas back and forth.

Is there an overarching concept behind your new album that ties the record together?
Well the full length is a story covering a good ten-year period of our character’s life through some very high and very low points in his life. The theme that keeps floating to the top is his resistance to surrender, and how refusing to give up can work for him and against him. A lot of the band’s story and my personal life are wrapped up in narrative as inspiration for some of the emotions, but this character is an exaggerated version no doubt.
Have you begun playing these songs live and which songs have elicited the strongest reaction from your fans?
“The Chase” seems to be the favorite one live, but we’ve only played the other two a couple times each in front of people. We are still figuring out how to perform them ourselves. I can’t wait for the EP to come out so people can sing along. I think all three songs off the EP are anthems and I’m looking forward to sharing the microphone with everyone this summer.
(For more about the band, visit them here:
www.abandonkansaslovesyou
www.facebook.com/abandonkansas
www.twitter.com/abandonkansas
Check out the video for “You+Me+The Radio,” here: http://www.youtube.com/watch?v=5GAdGyoxgUo&feature=player_embedded)