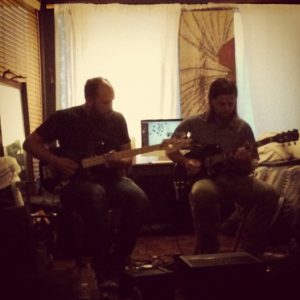 By David C. Obenour
It’s been awhile since I’ve been to a house show. It’s also been awhile since I’ve listened to David Bazan or his well-known earlier work as Pedro the Lion. So when I heard that the singer songwriter would be performing a living room show not more than 5 minutes away from my house, nostalgia and convenience finally tipped the scales.
The evening definitely delivered on nostalgia too. Standing around drinking a tall boy from a brown bag and waiting for the show to start I couldn’t help but keep singing a line from Jawbreaker’s “Bad Scene, Everyone’s Fault” in my head: “makeout sessions, bicycle messengers, punks and high school dropouts.” I wasn’t identifying with the lament, Dayton doesn’t foster much scenster-ism (thank god) and no one was making out, it was just the overall house scene vibe that’s become so foreign to me in the last few years. It was nice. Everyone was friendly and the host (of local metal gods, Mouth of the Architect) provided snacks and Blue Ribbon to share. In fact it was probably the exact opposite of the crap that Schwarzenbach was singing about, I just don’t know too many songs about house shows.
After taking advantage of a cheap buzz courtesy of the BYOB policy, the show started in good spirits. Touring as a two-piece of guitar and bass, vocals were front and center over top a pair of practice amps and the occasional foot stomped percussion. Which works perfectly considering the exploratory and contemplative nature of Bazan’s work from over the years. Having not seen him in maybe a good… seven years? It felt that he was playing more Pedro songs than normal, which makes sense considering the upcoming vinyl reissues courtesy of Jade Tree. Regardless of the era, all of the material fit well together and the living room show seemed to really compliment the music.
If you’ve never been to a Pedro or Bazan show it’s also interesting to note the interactive element. Whether it’s as formal as a session at the end of the set or as informal as some banter inbetween songs, Bazan welcomes questions from his fans. This particular night subjects ranged from the inevitable politics to religion to vinyl sales and album reissues. It’s all very telling of a fanbase that’s yearning for something more, both in their music and in their lives. Bazan fans tend to be contemplative folks and getting together for a show can quickly turn into a philosophical bull session. That might turn some folks off, but Bazan is an intelligent and well-spoken dude so his answers are definitely worth the more talk, less rock.