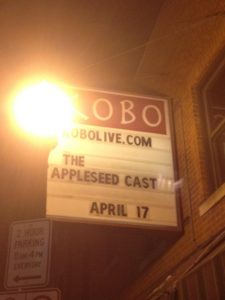 Words by Kris Poland, All blurry mobile phone photos by Poland and Joe Dapore.
As my friend Joe and I arrived a bit late to Kobo on High Street in the fair city of Columbus, Ohio we were greeted by the swirling wash of effects-soaked guitars emanating from the club. The End of the Ocean had already begun playing. Although they’ve been around for a few years now, that night was my first exposure to this five-piece post-rock powerhouse. Fans of their flavor of instrumental music will unlikely find any surprises here, but they will certainly take comfort in what is present: strong musicianship and competent songwriting. Songs were separated by interludes comprised of various movie clips, and LOUDquietLOUD arrangements were in full effect. The End of the Ocean’s four song set managed to simultaneously sound both tight and expansive, and they set up things nicely for the night to come. The few sentiments expressed into the single vocal mic on stage made clear the band’s appreciation for playing a show with some of their musical heroes. The Appleseed Cast couldn’t ask for a better opener.

The End of the Ocean

Ease the Medic were up next. They’re the kind of high energy, no-frills act that you want to see at your local rock and roll bar. While they’ve enjoyed the high profile exposure of playing SXSW, they still seem perfectly at home rocking the fuck out of a small venue on High Street. I remember seeing them years ago (even sharing the stage with them on a couple of occasions), and they haven’t lost a step since. Angular guitars layered over one another, and the tight rhythm section plowed ahead with a tangible sense of urgency. This wasn’t bullshit blues-derived commercial rock. It was honest and fierce. Ease the Medic were equally as gracious as The End of the Ocean, reminding us all how important bars and house shows can be in maintaining a vibrant local music scene.

Müscle Wörship are fantastic, and paired perfectly with Ease the Medic. A power trio with fine musicianship to boot, they blew the crowd away. Fingers flew over fretboards, and I was really surprised to see these guys pull off a sound just as rich and complex as Ease the Medic with one less member. Müscle Wörship’s umlauts make clear that they are not fucking around, and they have the chops to back it up. It’s nice to see such talented bands coming from the midwest. Maybe no coast is the best coast. After this powerhouse performance, everyone at Kobo was incredibly riled up for the headlining act to come.

I hadn’t listened to The Appleseed Cast in a few years. Seeing this show forced me to ask myself how this could possibly be. Their music is just as sweepingly beautiful and emotionally charged as it was when they first pulled me in back in my college days. Call it emo or shoegaze or post-rock. It doesn’t really matter. These four guys are masters of their craft, and their years of experience have culminated in a sound that demands attention. While younger fans pumped their fists and sloshed beers on one another up front, I stood at the back with the rest of the old guys. I closed my eyes, listened, and got lost in the music’s majesty. And I wasn’t the only one. After a short but magnificent set, the band retook the stage with little cajoling to pump out a memorable encore that had longtime fans singing along with every word. A glow was present on every face in the audience that night. We knew what we had shared was something special. Sure, scenes such as this play out in bars across this nation every day of the week. Nevertheless, each one is a unique moment in time shared by friends and strangers moved by music.

This show is evidence of the power of great booking. All four bands complimented one another nicely, and the lineup worked perfectly. Add to that a big crowd in a small venue made up of fans with a true appreciation for what they experienced, and you get my favorite kind of concert. I will take a show like this, filled with genuine feeling and a real sense of reciprocity between performer and audience, over a sold out arena any day of the week.

Tags: Appleseed Cast, Ease The Medic, Muscle Worship, The End Of The Ocean