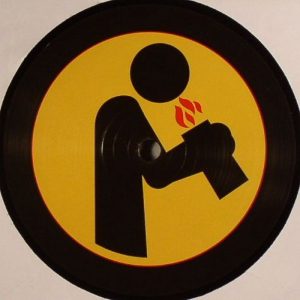 No idea what the guy is doing in the image, but this Amit/Outrage single is the pick o' the day.

AMEN
In a world where experimental electronic music exponentially splinters into a multitude of rogue genres that slowly shuffle the globe from demilitarized dance floors to sleeper cell bedroom studios and back, a team of disparate scientists tracks this solanum-like pandemic while desperately trying to interpret cryptic field recordings of Samhain’s past, not one day at a time, but from Amen to Zombie…
Yes, yes October is finally here.  Already buses are traveling around town with orange and black signs advertising for some of the up and coming haunted houses.  Which means I only have 31 days to track down any Halloween related CD and cassettes.  Starting Oct 7th that is.  I think it takes about a week for every mom and pop to get their act together and put out the minimal amount of Halloween schwag that will keep foot traffic coming into their stores.  This is usually where you find the best stuff.  And I just booked a flight to Boston to go visit a friend.  If I could somehow get to Salem for Halloween AND find some CDs, well that would just be a stone groove now wouldn’t it?  Anyway on with the show…
There’s some 8 count call and response on this page.  Something I really don’t like, it’s lazy.  Or maybe easily abused.  Although a good learning tool for producers I guess.  Or maybe it’s just a natural reflex when your building repetitive music.  Not in any pejorative sense, just that this music is obviously conscious of repetition.  But an easy way to beef up your production is to just run that twisted bass sound through a flanger before going right back to that same bass sound.  Crude but effective.  Check Angle: “Bubbler” for an example.  Just like cutting the bass for a bar and then slamming it back in.  Everyone is all hands in the air.  That’s a key point for my interest in d&b, there is this churning maelström of drum sounds you can dig into, past the snare on the 3, 6, 10, & 13 holding the whole thing together.   There’s all these strange time signatures darting in and out that you can try to wrap your head around.  Or you can just nod your head to the snare.  Either way, if the producer has done something interesting, you won’t be sure they’ve done anything at all.