In a world where experimental electronic music exponentially splinters into a multitude of rogue genres that slowly shuffle the globe from demilitarized dance floors to sleeper cell bedroom studios and back, a team of disparate scientists tracks this solanum-like pandemic while desperately trying to interpret cryptic field recordings of Samhain’s past, not one day at a time, but from Amen to Zombie…
ZOMBIE
I’m finally recovered from Halloween weekend. Too much to relay in this blog but here’s a quick run-on sentence:
Friday at a shitty rib bar that had a UFO catcher where you could win a two-dollar lobster, DJing top 40 hip-hop to angry douches and big titty chicks, 5’5″ James Brown lookalike does an incredible split, Black-ula wins 2nd in the costume contest, no free drinks, kids recognize me as Harry Potter on the bus, wake up Saturday to construction, arrange house for massive Halloween party, hanging out with my sister Britt and fellow Ghettoblaster Artie, Grab Bag Bonanza, pumpkin carving, Jello shots, spooky syringe shots, “Jon” from Delocated, more Grab Bag Bonanza, Thai girl + bull horn = fun, wake up Sunday to shuffle to my Japanese lesson in which I can barely put two words together, half-hearted attempt to clean up, apply ground score zombie make up, half a high school moshing to 12th Planet at the Grog Shop, Gaslamp Killer-ing it, fake plastic eyeballs, Daedalus’ birthday set, one, two, five many vodka and tonics, Monday = day off.
I’m sure you can see why I love Halloween so much. In my prep for the house party I made it to one of those rogue Halloween stores that pop up in late September/early October and sell nothing but costumes and Halloween goods. Despite having severe buyer’s remorse immediately after exiting the store, I got some spooky gear. First thing I grabbed was an old-school looking skeleton door decoration. I’m sure you’re familiar with the type; basically a charcoal sketch of a semi-old looking skeleton. Probably what passed for a medical drawing more than a century ago. But it had one important update: glow in the dark paint. See? You don’t need to go too off the page. Just update the classics and you’re good. Halloween decorations nowadays are abominations. Everything is super cartoony (my guess is that you can draw that line in the sand the year that The Nightmare Before Christmas premiered). Either that or it’s unnecessarily bloody. I grew up with spooky Victorian era artwork, and I think that’s what works best. Too cartoony and you have to stretch the limits of your overactive imagination to conjure up a good fright. Too gory and it’s like Halloween porno, you actually get to see what the darkness can do to you. Anyway, of course I picked up some Spooky Sounds CDs so let’s get to it: 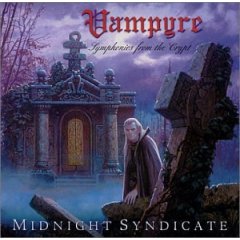 As I was contemplating buying a voice changer for my “Jon” from Delocated costume, I spotted two stacks of CDs way at the bottom of the register. Not necessarily in the mix with the other Spooky Sounds CDs (there was a 99 cent one I scored as well, which I’ll review next time) but low on a dusty shelf were two CDs by something called Midnight Syndicate.
Now before we dive into the sound, first it’s a good idea to understand how excited I was at the prospect of a band or artist producing an album around the idea of Halloween. Or not even exclusively Halloween, maybe just subjects in the fog of Halloween, say vampires. This might seem like the best thing on paper. It isn’t.
Midnight Syndicate are two guys from Ohio with a Victorian fetish. They employ the most sterile sounding synths to create same-sounding, creatively titled Victorian Muzak. I’m so sorry to have to tell you that Midnight Syndicate sucks. It was my sincerest hope that this would be a diamond in the rough, and that it would prove to be a vein of Spooky Sounds music that would have the idea of a Spooky Sounds album distilled into its most awesome parts. It is not that.
Now it could be that I’m just not listening to the best stuff. This album, Vampyre, was the only real album that the Halloween store had. The other disc was a compilation of the group’s first thirteen years. The group is also the only one to have an officially licensed soundtrack to Dungeons & Dragons. And what that means is that, yes, there’s BGM to the D&D TV show, yes there was a movie, and of course countless permutations of the original board game. All of which might have had some sort of music attached to them that you ultimately couldn’t buy or even find. But Midnight Syndicate’s album, appropriately called Dungeons & Dragons, is I’m guessing the soundtrack to the very idea of D&D.
But I digress; this is a blog about Halloween. And I’m guessing that someone who had a skid of these CDs said, “Yeah put those out, chumps will love ’em.” And so I’ll reserve fully dismissing Midnight Syndicate until I hear another album. To be completely honest, the rest of the catalog looks pretty sweet and if there was one album among them that would be lame, I’m guessing it would be Vampyre. Where else do you go with that subject matter but straight to Victorian-era Phantom of the Opera cords and Mary Shelly song titles? It’s a knee jerk reaction. Now if they tried to produce a instrumental album based on Blade style vampires? That would be something I would like to see, but ultimately would not get them gigs as the BGM at Six Flags.
Yes, as an aside, Midnight Syndicate has had some of their work used as the BGM for amusement park rides. However, their first album is a melange of genres. From the insert a note about a made-up genre called Cine-fusion:

A blending of movie soundtrack music and pop music… a compilation of soundtracks to movies that do not exist. The goal of the music is to stimulate the imaginations of listeners so that they are able to transport themselves to worlds or movies of their own creation.

Which again sounds great on paper. Actually sounds like the same chorus voice on a Roland synth on every track, not bleak but boring chord progressions, and nonsensical percussion (too much gong). But the rest of the catalog holds promise. On their first album there is Cine-fusion rap. Try and get your head around that one.
Goodnight out there, whatever you are.