In a world where experimental electronic music exponentially splinters into a multitude of rogue genres that slowly shuffle the globe from demilitarized dance floors to sleeper cell bedroom studios and back, a team of disparate scientists tracks this solanum-like pandemic while desperately trying to interpret cryptic field recordings of Samhain’s past, not one day at a time, but from Amen to Zombie…
Amen
Still reeling from that last entry I’ve dug back into the sounds of my DR 202 and came up with this little John Carpenter inspired loop.  And that got me pondering if we’ve come to an age where a drum machine has as much functionality as a toaster or a waffle iron.  That loop took me about an hour to edit all the sounds, write the little ascending synth melody, and place all the sounds in an loop.  And although that mp3 is a bit tinny, it doesn’t sound that far off from anything on the They Live OST, in my opinion that is. But I don’t have extensive knowledge of programming drum machines, and the apps you can get for your iPhone today greatly simplify the process. Yet, it was a quick hour’s worth of work to produce something passable.
With the implosion of the music industry in the States, are we that far off from making a few quick choices on a box plugged into the wall to have it spit out completely new music that suits our mood or taste?  Could we be far off from adding a sort of drum machine to your home stereo set up?  One that had the capability to gobble up your favorite tunes, then spit them back out at you in endlessly new and interesting permutations?
And what about our music needs?  With user content flooding the web, there is more of a need for license-free music to pop up in the background of someone’s crappy YouTube home movie.  What will our listening needs be in the next 10 years?  Muzak has gone from The Girl From Ipanema to Mos Def (don’t kid yourself; Quite Dog selling cellphones has made me want to ignore that joint from now on).
How far are we away from choosing the tunes we hear on commercials ourselves?  Maybe a new iTunes app where your TV is synced with your library and every time a commercial comes on it selects a tune from your “TV commercials” playlist?  What if instead of making a mixed CD for the next BBQ you could just tell a drum machine what you were cooking and it would give you some tunes to accompany?
In case you’re wondering, I would be in favor of all this.  I think there also lies at the center of a musician the desire to produce music that they would like to hear, rather than listen to everyone else’s ideas of what music should be.  And now that everyone can have the technology to produce “content,” that technology might start to embody that DIY spirit in a strange, mutant way.  I would love to see this. I think it would further break down the poles of consumption and production.  Or at least tip it more to the production side of things, where instead of a huge collection of music, you’d only have to buy one tiny drum machine and make a few simple choices.
The drum machine would have a utility similar to a blender or something, but not it a bad way.  In the way that a blender will not give you a smoothie unless you put some fruit, milk and ice cream in it, this new drum machine I envision wouldn’t give you any tunes unless you made a few simple choices or fed it with some of your other favorite music.  The way the DR 202 is, you have to farm your strawberries and milk the cows to get some beats kicking.  But remember that the DR 202 is like 20 years old.  You can run down to the grocery, AKA internet and pick up some beats at a bargain price.  Then just put them into the blender and enjoy.  The ghost of Mitch Hedberg would say, “I don’t have a futuristic drum machine, but I do have a clock that can DJ my Hawaiian BBQ!”  Sure he would.  Now on to:
Notable Releases:
C.A.B.L.E/Noah D – Burning/Soul of Sagittarius
This one is a promo from back in ’07.  True to promo form, the artist and track titles are messed up/missing.  But Barry and Levon would be proud because “Soul of Sagittarius” is a rolla!  Bouncy/punchy bass line, nice drum programming, and enough synth riffs and catchy hooks to keep you interested, but not too much to make it sound like they just threw in the kitchen sink.  Burning is some straight bullshit though.  Can’t win them all… yeah.
Jonny Cage – Bass Hertz/Terminator X
Real quick on this, Bass Hertz is a wonky sort of tune with rattling Amens and dub techno appeal.  “Terminator X” is just a nod to PE with some jump-up bullshit.  Really like the A, really don’t the B.
Calibre 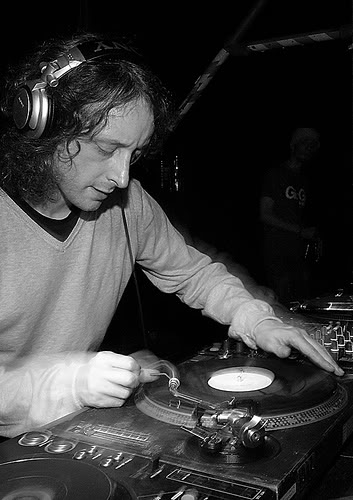 This week’s artist in residence is D. Martin.  A man of few words, at least spoken and then written down and then published.  But like all artists worth their salt, the product and production speaks for itself.  The style is mostly a kind of smooth, Romantic d&b particularly on his Signature Records label.  I hesitate to use the label Liquid, but I think some of it does deserve to get lumped into that sub-genre of d&b.  Here’s a few smooth ones:
Jane’s Twitch/3 am
Makes Me Wonder/Got to Have You
It’s a special kind of groove on these ones for me.  Although they have that snare on the four, it never feels too in your face or out of place.  Just the right mixture of percussion and vocals and melodies and groozy loops.  One of the few artists that I truly believe knows how to correctly use a vocal in a tune.  Just about everything on Signature Records is worth listening to and will reap the benefits upon repeat listens.  But just so you know, Signature is Calibre’s main creative outlet, no outsiders and very few collabs.  When he releases on other labels it’s a bit more dance floor ready.  Meaning everyone pumping their fists instead of nodding their head.  Check releases on V and 31 Records for more bouncy stuff.  But for that head nod shit that make you break yo nek…
So it goes.